After missing the playoffs in two consecutive seasons following their championship in 2013, the Red Sox were able to re-join the American League’s elite last year.

In what was the grand finale of David Ortiz’s legendary career, they rallied around their 40 year-old DH and won the AL East for the first time since that historic run three seasons prior.

Papi may be retired, but with some key off-season acquisitions and the growing talent of their young stars, the Sox are in position to improve on a 2016 season that ended with a sweep in the American League Division Series. 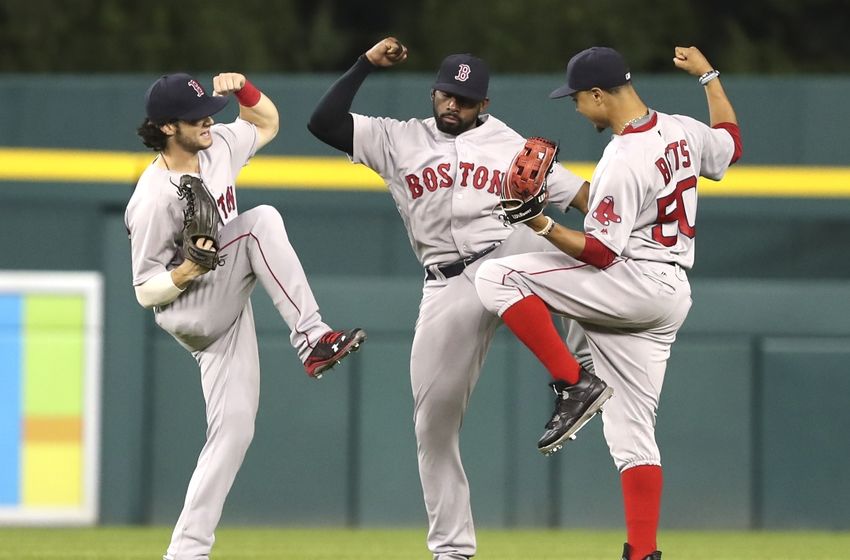 Besides Papi and Dustin Pedroia having productive seasons, the biggest difference for the Sox last year was the development of their young talent.  Mookie Betts becoming an MVP candidate (he got robbed).  Xander Bogaerts, Jackie Bradley Jr., and September call-up Andrew Benintendi all giving us hope that we’ll have a high-powered lineup for years to come.

There’s no reason that Bogaerts and JBJ shouldn’t both be All-Stars this year along with Mookie.  And although 23 years old, Benintendi is definitely capable as well.  At least pencil him in for Rookie of the Year.

Led by those four young stars, the 2017 Red Sox will have the best offense in baseball.  Losing Papi won’t be easy, but it doesn’t change the fact that this lineup is still stacked with hitters.  In addition to the young guys, Hanley Ramirez has shown that he can still rake and he’ll now be able to occupy the DH spot while off-season acquisition Mitch Moreland takes over at first.  Sandy Leon is coming off a career-year at the plate and Pablo Sandoval is looking the best he’s looked since San Francisco.  I think Red Sox fans and media finally humiliated him to the point where he decided to get his shit together.

The Red Sox’ pitching in 2016 was solid.  David Price wasn’t quite as good as many had hoped but he was still productive with 17 wins.  I wouldn’t be surprised if he shows improvement this year since he won’t be going into the season with the pressure of being the number one guy.

Rick Porcello most likely overachieved on his way to the Cy Young Award.  We’ll see a regression this year, but that doesn’t mean we shouldn’t expect an All-Star appearance now that we know what he’s capable of.  He’ll take the ball on Opening Day at Fenway on Monday.

Chris Sale will be a great addition.  Bringing in another ace takes pressure off Price and Porcello.  Sale is a fiery competitor he seems to have some of the mental fortitude that Price evidently lacks.

As for the bullpen, I’m excited to see what Joe Kelly can do as a full-time reliever.  He and Craig Kimbrel could turn out to be quite the one-two punch in the final innings.  After that it’s a bit of a crap shoot.  Carson Smith and the newly acquired Tyler Thornburg will start the season on the DL, forcing us to rely on guys like Heath Hembree and Robbie Ross Jr. for middle relief.

Now we shouldn’t get too ahead of ourselves, but when October comes around (assuming the Sox make the playoffs) the questions are once again going to be about postseason pitching, specifically the starters.  Porcello and Price were both atrocious in their outings in last year’s division series.  Now we bring in Sale who has never pitched in the postseason in his seven-year career.

It was tough running into a red-hot Indians team that would go on to play a seven-game World Series.  But winning the division and then getting swept in the first round can be classified as a disappointment.  Despite the lack of historically successful postseason pitchers, I don’t see it happening again.  You have to think Price and Porcello are due for some good playoff starts and Chris Sale seems like the type of guy who’s never afraid of the moment.

With the roster they’ve put together, it’s reasonable to predict 95 wins and a World Series appearance.  There are only one or two teams (Cubs and Indians) that you could say have a better shot when you look at their level of talent.

The journey starts Monday as the Sox welcome the Pittsburgh Pirates to Fenway.  First pitch is at 2:05 pm.