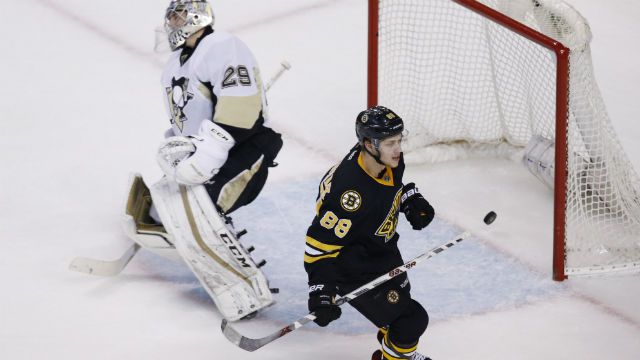 The Boston Bruins have the third best road record (20-7-3) in the NHL this season, but only the ninth best record overall.  This can be credited to their absolutely inexplicable 13-15-3 record in front of their home crowd at the TD Garden.

Wednesday night’s Bruins game left a lot of fans wondering where the hell the effort at has been at home all year.  The B’s dismantled one of the a star-studded Penguins squad 5-1 in their most complete performance in recent memory.

Tuukka Rask was dominant between the pipes as he finished the game with a season-high 41 saves, 27 of which came in the first two periods.

David Pastrnak got the Bruins’ scoring started with a goal in each of the first two periods to put them up 2-0.

Pittsburgh’s Tom Kuhnhackl cut the lead in half just a minute after Pastrnak’s second goal when the puck deflected off of his skate and into the net.  The controversial play was reviewed, but to the displeasure of the Garden crowd the goal stood:

Fortunately, the B’s ran the show in the third period as Tuukka continued to be a brick wall and Jimmy Hayes, Landon Ferraro, and the red-hot Brad Marchand scored three goals in less than five minutes to give Boston a much-needed 5-1 victory.

Marchy has been on a tear this season.  He already has a career-high 31 goals and we’re still in February.

On the contrary Jimmy Hayes has been a disappointment, so it was good to see him light the lamp as well.

The Bruins will look to add to their impressive road record tomorrow night as they travel to Raleigh to take on the Hurricanes.