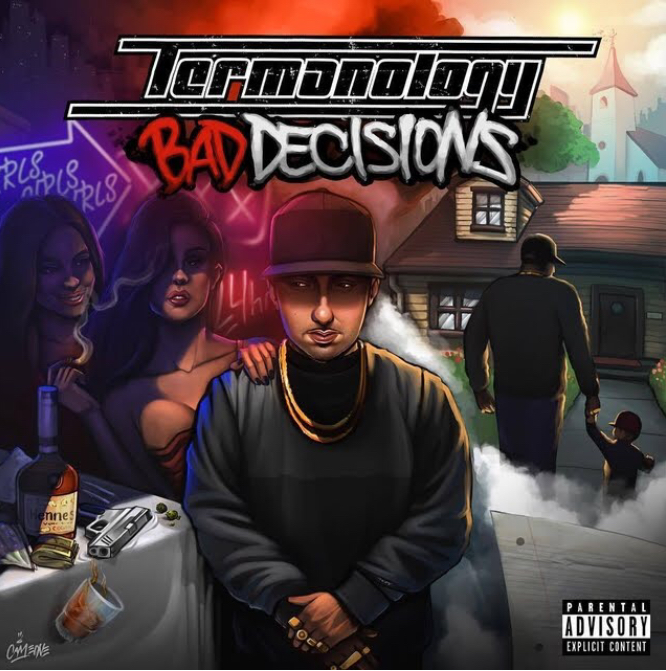 Massachusetts’ own Termanology is one of the hardest-working artists in hip-hop.  If you disagree, you’re welcome to compile your own list of rappers who have released 35 projects or more over the last 16 years, each one living up to the hype created by the one before.

The Lawrence, MA emcee’s career has existed during the new school era, but he’s very much a 90’s rapper in his style and approach.  This has been evident since he gained notoriety in 2006 with the DJ Premier-assisted “Watch How It Go Down”.  Term is one of the few artists in 2018 who still puts out quality East Coast boom-bap rap on a consistent basis.

This time, he’s coming off the success of “Anti-Hero”, his 2017 collaborative album with fellow Mass hip-hop legend Slaine.  As he always does, he found time while touring to complete and release his second album in less than a year and his 10th overall.  It’s called “Bad Decisions” and it’s out now on all streaming platforms.

Some of the production comes from long-time Termanology collaborator and Boston-bred Statik Selektah.  If you don’t know him, you should.  He’s probably worked with your favorite rapper at some point.  Other producers include Termanology himself, Shortfyuz, Psycho Les of The Beatnuts, Daringer, Lex With The Records, Dame Grease, Erick Sermon, and Loman.

As for the features, there’s Wu-Tang’s Raekwon with the opening verse on the lead single “Passport Kingz”, Conway from Eminem’s Shady Records, Massachusetts native Millyz, and Connecticut’s ANoyd.  Smif-N-Wessun, Benny, Willie the Kid, and CRIMEAPPLE all make appearances as well.

My personal favorite track is “Guess Again”.  No feature, just a hard beat from Psycho Les and some impressive rhyme schemes from a rapper who’s always had a knack for gritty verses reflecting on the street life from different angles.  Example:

“The presence is holy, this is what the reverend told me/ You don’t need a froze neck or a rollie/ Cause then stick up boys will use your fuckin head as a trophy”

Two music videos from the album have been released so far.  Here are the visuals for “Termanator & The Machine” and “Kaleidoscope”: