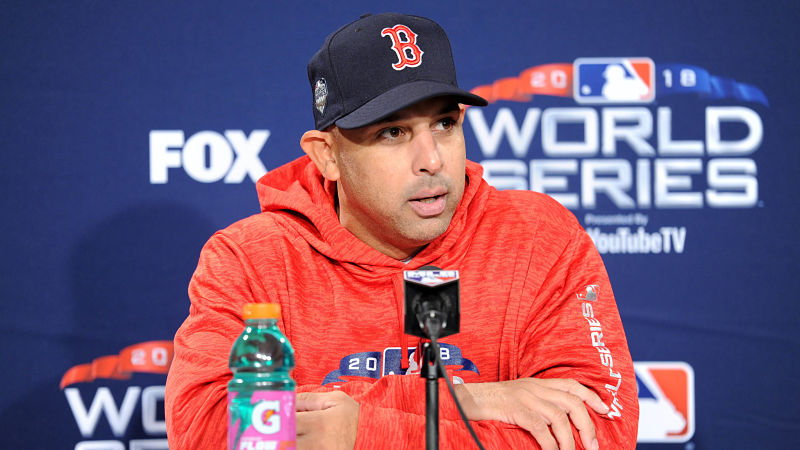 Well that was fun.  The two best teams in baseball clawing back and forth with their best pitchers on the mound before an eventual late-inning knockout blow.  If Game 1 was any indication, we’re in for a hell of a week.

Chris Sale wasn’t great but he was good enough.  He got through the first unscathed after allowing one hit, and the Sox were able to get to Clayton Kershaw right away.  Mookie Betts started things off with a single in the first and was driven in by Andrew Benintendi:

Benny then scored on an RBI single by JD Martinez and the Sox took a 2-0 lead in Kershaw’s first inning of work:

Sale’s first mistake came in the second when he allowed a solo shot to Matt Kemp to cut the lead in half, and then Manny Machado tied things up with an RBI single in the third.

After a call was overturned in the bottom of the third and Steve Pearce was ruled safe on what was originally an inning-ending double play, JD came through once again and gave the Sox a 3-2 lead with a two-out RBI double to deep center:

Sale was pulled after starting off the fifth by walking Brian Dozier, and Dozier scored on a single by Justin Turner off Matt Barnes to tie things up 3-3.  Kershaw also departed early in the fifth thanks to a lead-off walk to Mookie and a single from Benintendi.

Chris Sale and Clayton Kershaw, two of the great lefties in the game, both made it only four innings.  Their outings were nearly identical, although Sale allowed two less runs (3) and recorded two more strikeouts (7).

Ryan Madson took over for Kershaw with no outs, and began his outing with a wild pitch to advance the runners before eventually allowing both of them to cross the plate.  Mookie scored on a fielder’s choice, and 21 year-old Rafael Devers delivered yet another key postseason hit:

The seventh inning proved to be the most important, and it all came down to managing.  The Dodgers used three pinch hitters and Alex Cora made his only questionable decision of the night by not sticking with Joe Kelly after a 1-2-3 sixth.  He instead went with Ryan Brasier, who allowed two singles, a walk, and a sac fly to Machado to cut the lead back to one.  Eduardo Rodriguez had to come in and finish off the inning by retiring Cody Bellinger.

Moments later, Cora made us all forget about that minor mishap.  The play of the game came from Eduardo Nuñez, but it was orchestrated by the Sox’ manager.  You can call him a genius, you can call it luck.  It’s probably a little of both.  But his track record this season shows that he’s is the ultimate guru when it comes to pinch hitting.  Whether it’s Brock Holt, Mitch Moreland, Eduardo Nuñez, or even Brandon Phillips that one time, he always seems to pick the right guy for the situation.

Two outs, bottom of the seventh, runners on first and second, and a one-run lead.  Nuñez hits for Rafael Devers against the lefty Alex Wood.  Here’s your result:

Nuñez expressed after the game that he wasn’t bothered by the fact the he didn’t start at third despite Kershaw (a lefty) on the mound.  Cora assured him that he would get an at-bat late in the game.  Another example why this team’s success is largely based on how well-prepared they are every night.

Craig Kimbrel closed things out with the strongest inning we’ve seen from him in a long time.  Of course he had a four-run cushion, but nonetheless a confidence boost for him and every Sox fan.  Not a bad way to start the series.

Just to recap, here’s how the Red Sox responded to adversity in Game 1:

If that’s not a championship team, then please tell me what they’re missing.  Three more wins.

PS: Andrew Benintendi just became the first player in MLB history with 4+ hits and 3+ runs in his World Series debut.