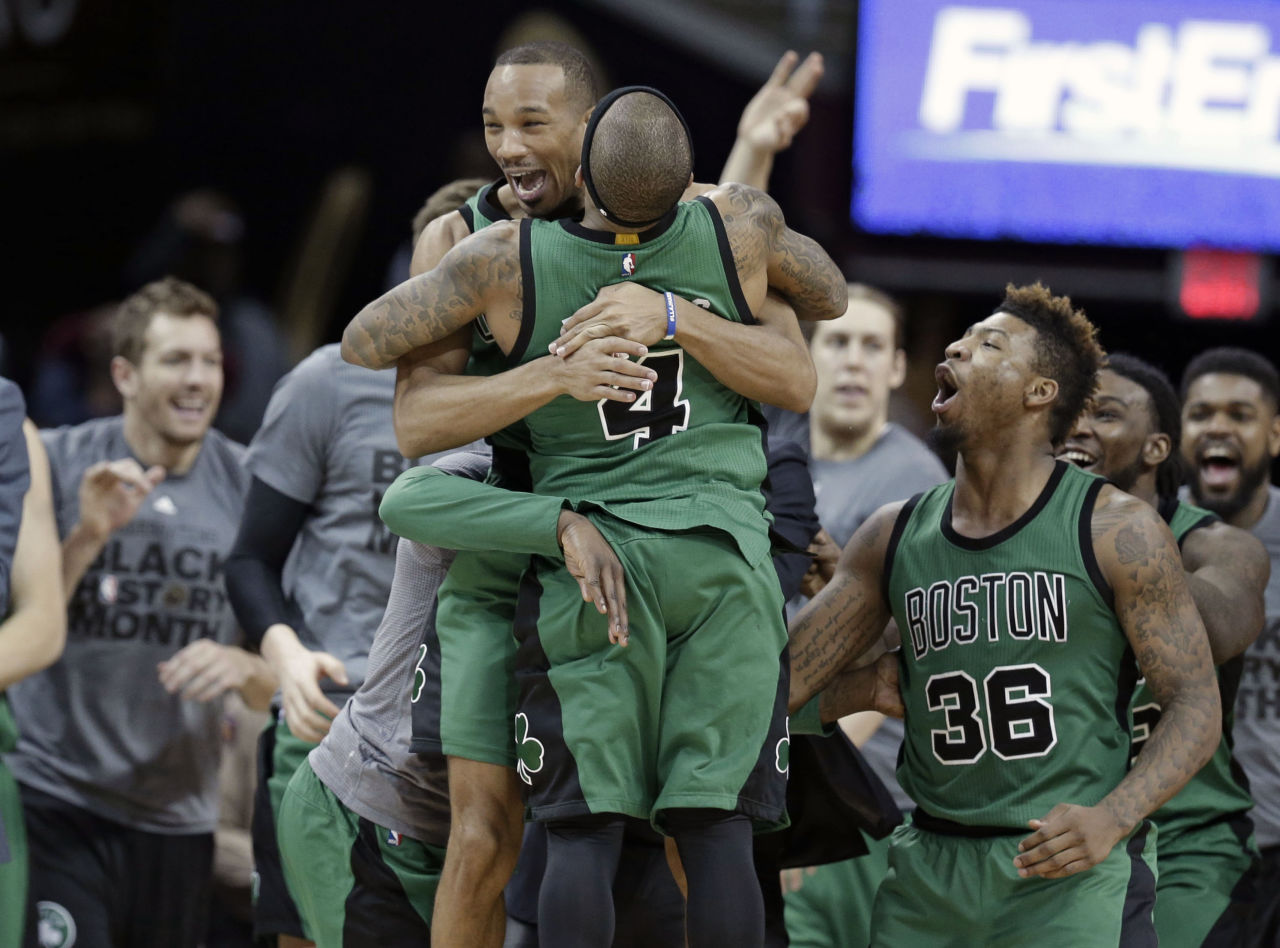 The Celtics have won 11 of their last 14 games and the biggest one of the year came Friday night in Cleveland.

I’ll admit I had my doubts early on.  The C’s played like trash to start the game and were extremely lucky to only be down 12 at the end of the first quarter.  But they fought their way back, cutting the Cleveland lead to six by halftime and briefly grabbing a lead in the third quarter.

They fell back behind before getting another lead in the fourth and then falling behind in the last couple minutes.  The game was tied at 94 when a LeBron James and-one put the Cavs up 97-94 with 1:30 left.  A Tristan Thompson offensive rebound and put-back increased the lead to 99-94 with just under a minute remaining.

Tyler Zeller then cut the Cleveland lead to three, only for Kyrie Irving to practically seal the deal at the free throw.  His foul shots with 18 seconds remaining made it a five-point game.

Jae Crowder, who has been dealing with a tweaked ankle and admittedly shouldn’t have been playing in this game, made his first field goal with 8 seconds left when he buried a three to make it 101-99.

Two more Kyrie Irving free throws stretched the lead to four before an Evan Turner layup cut it back down to two with five seconds to go.  ET had an opportunity for a three-point play but he missed the free throw.  The Celtics got the rebound and immediately called a time out

That’s when this happened:

The most impressive win of the season and the biggest shot of Avery Bradley’s career.  You just can’t count this team out.  You wouldn’t think they would have a chance of beating the best team in the East in their building when Jae Crowder only scores two points, but when one man goes down another one steps up.

Evan Turner was unbelievable.  He finished with 19 points, 12 rebounds, and 6 assists.

Tyler Zeller continues to earn himself more minutes as he shot 8-10 on his way to 16 points.

Jae Crowder may have had his worst game of the year offensively but he still managed to slow down LeBron James, holding Bron Bron to 9-23 shooting.

Isaiah Thomas wasn’t great from the field, but was a perfect 11-11 from the line on his way to 22 points.

Jared Sullinger had 12 points and 7 rebounds and Avery Bradley finished with 14 points including the miracle game-winner.

After a poor start to 2016, the C’s have caught fire and find themselves tied with the Atlanta Hawks for third in the Eastern Conference.  The consistency they’ve had over the last 14 games is reminiscent of the run they went on at the end of last season, the only difference is that instead of fighting for a playoff spot, we’re at the point where we’re fighting for home court advantage.  It’s a fun time to be a basketball fan in Boston.