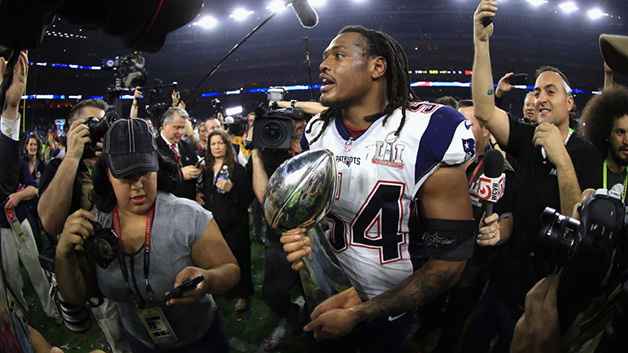 Bill Belichick normally doesn’t say much to the media.  That didn’t change during his press conference on Friday, but he was able to find a few extra words when asked about Dont’a Hightower and the impact that his loss will have on the Patriots’ defense:

“Obviously we’re all disappointed for High,” Belichick said. “He’s one of the leaders on our defense and one of our captains. He gives us a lot. It’s unfortunate, but it’ll give somebody else opportunities. We’ll see how that goes.”

There’s no questioning the impact that Dont’a Hightower has had on the field since he was drafted by New England in 2012.  In the five-plus years since then, he’s managed to produce two of the biggest plays in franchise and Super Bowl history.

First there was the game-saving tackle of Marshawn Lynch at the goal line to set the stage for the Malcolm Butler interception.  Then there was the strip sack on Matt Ryan in last year’s Super Bowl that was probably the most important play of the Pats’ historic comeback.

But for Bill Belichick to call you a leader, you have to do more than just produce on the field.  So if you want to know what Dont’a Hightower does besides making game-changing tackles, you should check out the mic’d up footage from that legendary Super Bowl win nine months ago.  When they were down by 25 points, nobody was more vocal than Hightower.

Whether or not the Patriots will be able to recover from losing arguably their most important defensive player remains to be seen.  But if there’s any year where they can win a Super Bowl with a mediocre defense, it’s 2017.

Why?  The AFC sucks.  Its hot garbage.  Even with injuries, there isn’t a single team that I can see disrupting our path back the big game in February.  Feel free to correct me if I’m wrong.