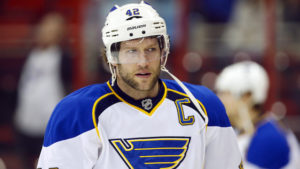 Bruins made a big splash just twenty minutes into free agency. Signing former St. Louis Blues captain to a 5 year, 30 million dollar contract. Some will be outraged by hearing this, as Loui Eriksson was not resigned and signed for the 6 years at 36 million in Vancouver. I agree that overall Loui is the better player, but Backes is a very tough player than the Bruins value.

Paying Backes 6 million a year is not cheap, but for a guy who fits the Bruins so perfectly it might pay off. With Patrice Bergeron and David Krejci at center already with Ryan Spooner on the third line, Backes has no room to play at center. You really have three options here. 1. Put Backes at RW on Krejci’s line 2. Move Spooner to wing and have Backes center the third line 3. Trade Krejci or Spooner for a defenseman and have Backes move into the center spot.

To be honest, I would not mind any of those three scenarios as free agency is just now opening. David Backes could be what the Bruins used to have with Nathan Horton or Jarome Iginla. I have always liked when Krejci has had a rough right wing to play with. Welcome to Boston David Backes! Bruins are now the most American team in the NHL!