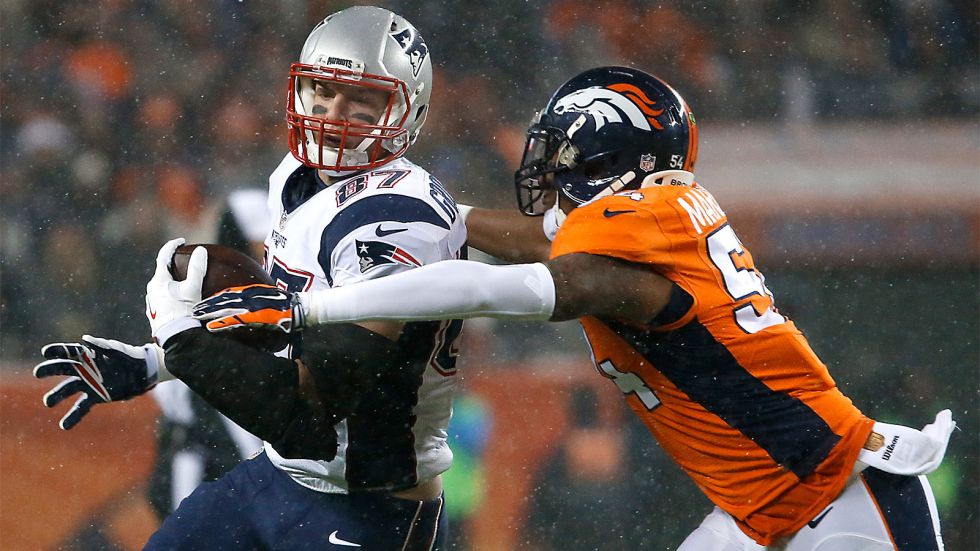 When you hear the name Brandon Marshall, you think of the six-time Pro Bowl wide receiver.

However, there is also a Brandon Marshall in Denver and he plays linebacker for the Broncos.

I tell you this because the NFL’s second best Brandon Marshall recently made some pretty ridiculous and borderline disrespectful comments about one of the league’s most dominant players.

Leading up to his match-up with the Pats in the AFC Championship this weekend, Marshall was asked about Rob Gronkowski and what makes him so hard to cover:

“I say ’cause he pushes off,” Marshall said. “I mean, he pushes off and he gets away with it about 98 percent of the time.”

That’s weird Brandon because Gronk actually leads the league in offensive pass interference penalties including this absolutely bogus call that helped Denver beat New England about a month ago:

Meanwhile, plays like this one somehow don’t warrant a flag:

I would say that Brandon Marshall should give credit where credit is due and just embrace the fact that Gronk is unstoppable because he’s simply faster, stronger, and has better hands than any other tight end.  I would point out that he’s actually targeted by the refs because he’s absolutely impossible to cover.  But I’m not going to sit here and discourage these types of absurd comments and claims because this is just the bulletin board material the Patriots need.

Just when you though they couldn’t get any more pissed off, it looks like the Broncos have made the poor decision to continue to add fuel to the fire by taking some disrespectful jabs.