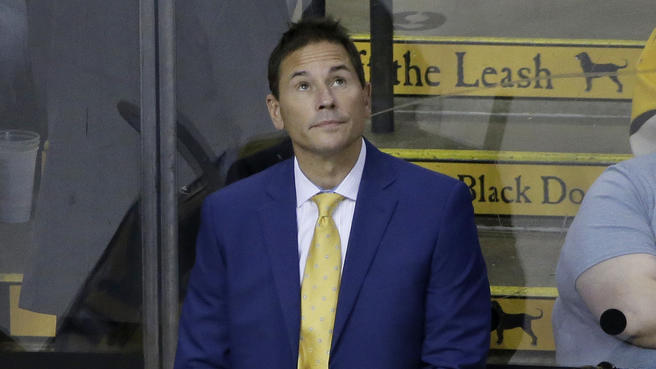 We’re only three games in, but the Bruins haven’t nearly gotten off to the start they had hoped for.  They sit at 1-2-0 after a 6-3 loss to the Avalanche at the Garden on Wednesday night as their home struggles appear to have followed them into the 2017-18 season.

There have been some mistakes from the numerous young players on the roster, but that’s to be expected.  What coach Bruce Cassidy is most disappointed in is the lack of production from his veterans:

“Some of the decisions that we made away from the puck to put out fires … all we did was create fires, really,” said Cassidy. “I’m disappointed in the group, because that’s where your veteran guys, your leadership, we should be better than that in those situations.

“Like I said, we know we’re going to have some issues with our young guys being hard on pucks, learning the ropes here and how to stay in the game. But I think it really hurt us tonight, our decisions.”

What Cassidy is likely talking about is the numerous defensive breakdowns we’ve seen up to this point, and that should certainly be put on the veterans.  David Krejci, Brad Marchand, Torey Krug, Adam McQuaid, and Kevan Miller all combined for a minus-10 on Wednesday.

They haven’t made things easy for Tuukka Rask, who hasn’t responded well to the pressure.  The 30 year-old was chased from Wednesday’s game and replaced with Anton Khudobin at the start of the 3rd period.

The B’s will look to right the ship Saturday night when they take on the Coyotes in Arizona at 9 pm ET.