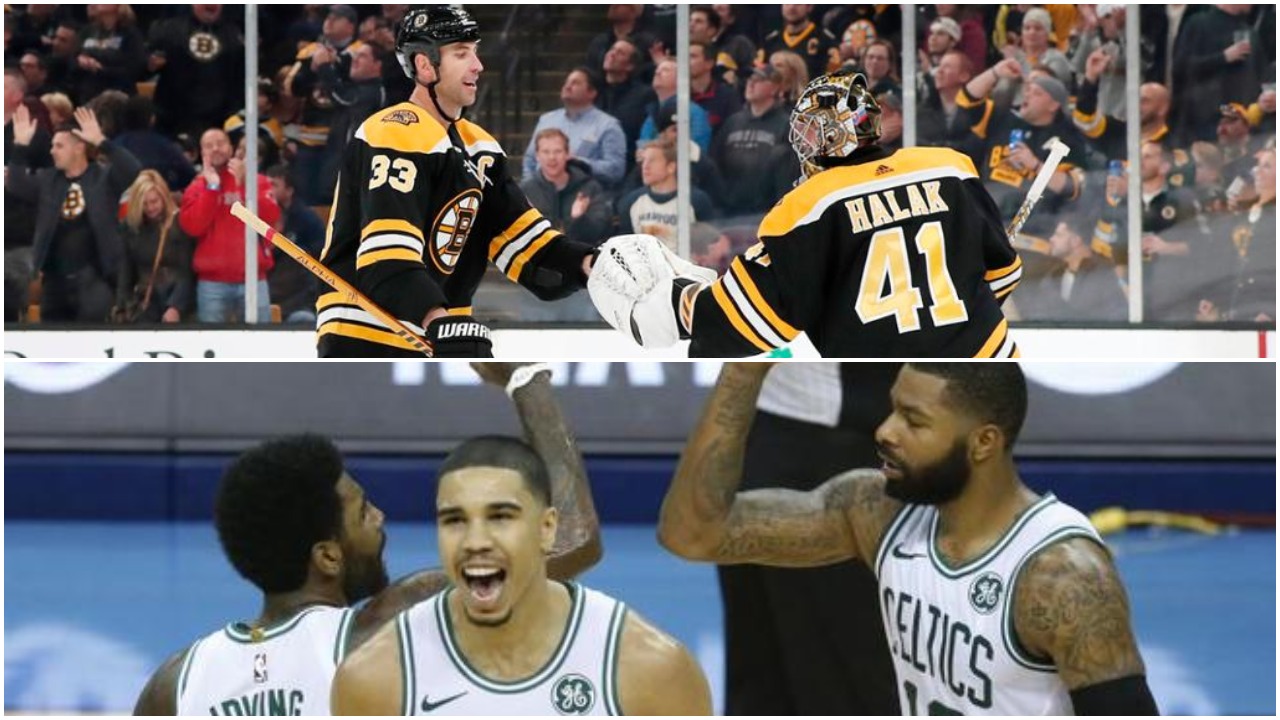 The Bruins and Celtics provided a nice night off from the excitement of the World Series.  Thursday saw the B’s shut out the Flyers 3-0 at the Garden thanks to a strong performance in net by Jaroslav Halak.  The C’s overcame a 16-point halftime deficit in Oklahoma City on a clutch shot by Marcus Morris and 24 points from Jayson Tatum.

For the Bruins, it was their second win in a row after they beat up on the Senators 4-1 on Tuesday.  Two much-needed games following a loss to the Flames and overtime losses to the Oilers and Canucks last week.  Overall they’re 6-2-2, good for second in the Atlantic behind Toronto.

Fourty-one year-old Zdeno Chara scored two of the goals and 22 year-old Jake DeBrusk took care of the other.  Halak stopped 26 shots and is looking a lot more comfortable between the pipes than Tuukka Rask these days.

The Celtics are off to a slower start than most people anticipated, but so are a lot of teams that are considered to be championship contenders.  The Lakers and Rockets are a combined 3-6.  At least the C’s are above .500.

Of course the only reason they’re above .500 is because they decided to wake up in the second half of Thursday night’s game in OKC.  Plus they remembered how to shoot.  They were 0-for-11 from three in the first half and then poured in nine shots from beyond the arc in the third quarter, including three in 90 seconds from Al Horford.

Horford finished with 19 points and 9 boards.  Jayson Tatum led all scorers with 24.  Marcus Morris recorded a double-double (21 pts, 10 reb) and hit the biggest shot of the game to break a 95-95 tie with 28 seconds left:

That’s the second time in two seasons that Morris has delivered a dagger in OKC.  The Celtics are now 3-2, currently the fifth best record in the East.

This team and coaching staff certainly have some things to work on.  Namely, distributing touches and minutes to a roster that’s overflowing with talent.  Not a bad problem to have, and we’ve seen Brad Stevens take a team led by a 5’9″ point guard to the Eastern Conference Finals so I think he’ll be up for the task.

The Celtics and Bruins both play on Saturday at 7 pm, so that should hold you over until Game 4 of the World Series starts an hour later.  The C’s take on the 4-0 Pistons in Detroit and the B’s play the Canadiens in front of a Garden crowd that will undoubtedly be fired up.