Charlie McAvoy grew up in Long Beach, New York and was an avid New York Rangers fan.  If you were to get really creepy and go back to his tweets from 2013 when he was 15 years old, you’d see that he once stated “I hate the Bruins so much” after the B’s went up 3-0 on his beloved Rangers in the Eastern Conference Semifinals.  Luckily you don’t have to do that because someone already did it for you: 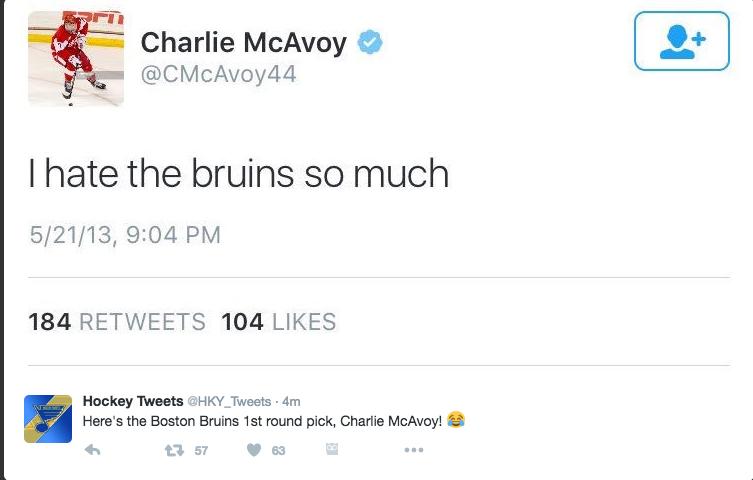 Three years later McAvoy insists that he’s grown to like the 617 after his time at Boston University, which is good because the B’s grabbed him with the 14th overall pick in the NHL Draft on Friday:

“I’m sure my friends back home are kind of happy, but I’m kind of cutting the ties with New York sports,” McAvoy said. “Boston’s an unbelievable city and it’s a great place with great people. I’m happy to be staying there.”

Boston fans will be happy to hear this, although he is having a little trouble learning to like the Patriots:

“You grow up and I guess you’re taught not to like them because of the rivalry and everything,” McAvoy said with a smile. “But I’ve got a Red Sox hat now, so that’s the first step and I’ve this Bruins jersey, so that’s pretty cool.  I don’t know if I can be a Pats fan, though. We’ll see.”

Of course McAvoy is under no obligation to become a Patriots considering that he didn’t grow up in New England, but it is nice when Boston athletes root for the local teams.  We’ll give him some more time to decide whether or not he likes Super Bowls.
Follow Jack Bardsley on Twitter @BostonsBigFour
Photo via NHL.com