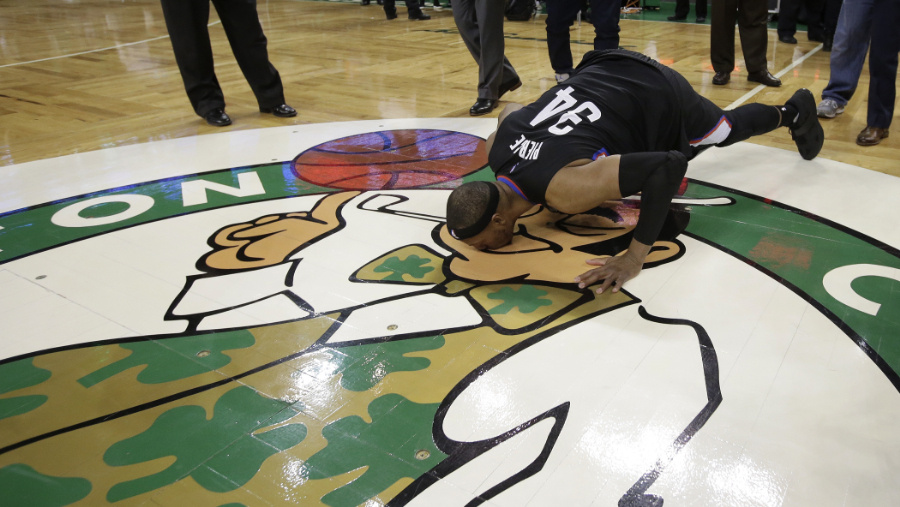 Before the Patriots pulled off the greatest comeback in Super Bowl history on Sunday, Paul Pierce stepped onto the parquet floor at TD Garden for the final time his 19-year NBA career.  It was perfect.

The Truth received a countless amount of standing ovations, starting with the moment he came out of the visitors’ tunnel for warm-ups and continuing when Celtics’ public address announcer Eddie Palladino gave his famous “the Captain, and The Truth!” introduction one last time.  That moment was made possible by Doc Rivers, who chose to insert Pierce into the starting lineup despite the fact that the 39 year-old has only appeared in 13 games this season.

During the first timeout of the game, a tribute video was displayed on the jumbotron recapping Paul’s 15 years in Boston both on and off the court.  He was acknowledged with an extra long ovation.  Nobody wanted to be the first one to stop clapping:

For the remainder of the game, Celtics were relentlessly chanting for one more Paul Pierce appearance:

Knowing the coach that Doc is, he wasn’t going to put Pierce back in unless the game was out of hand.  Luckily, the C’s had a two-possession lead with 19 seconds remaining.  Pierce got up off the bench, took off his warm-up, and started to walk towards the scorers table as the Garden erupted.

Al Horford was at the line and buried both free-throws, sealing the Celtics’ seventh straight win and setting the table for The Truth to take one more shot in the building where his legacy was born.  What happened next should surprise no one:

It definitely wasn’t the first time that Pierce made a shot in a moment where the entire Garden crowd was already standing, but it was unlike anything I had ever witnessed.  A player on the opposing team buries a three and the crowd roars as though the Celtics had just won on a buzzer-beater.  A perfect display of the unbelievable amount of respect that the city of Boston has for this guy, and he showed it back by kissing the logo at center court.  Don’t be surprised if he ends up back here after he retires.