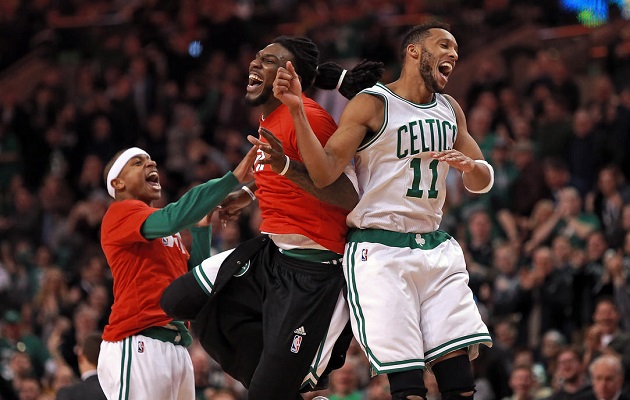 In ESPN’s latest NBA power rankings, your hometown Boston Celtics have slid up to the number eight team in the league.

Although they’re coming off a bad loss in Orlando on Sunday night, the C’s previously won five in a row have won 8 of their last 11.

With two and a half months to go in the regular season, they find themselves sitting just a half game out of the number three seed in the Eastern Conference with a record of 27-22.

The Celtics have a lone All-Star in Isaiah Thomas, and you don’t need to look any further than the fact that he’s 12th in the NBA in scoring (21.5 ppg) and 10th in assists (6.6 apg) to know that he’s an absolute stud.

But IT himself will be the first to tell you that the team’s success can’t be credited to one guy:

“He is someone who has been in my corner since I’ve met him,” Thomas said of Celtics coach Brad Stevens. “Without him and my teammates, I definitely wouldn’t be in this position. They really embrace who I am, and that means a lot.”

Although his name wasn’t necessarily in the All-Star discussion, I would even argue that Jae Crowder has been our best two-way player.

Isaiah is elite offensively and might be the quickest guy in the league, but Crowder gets it done every night on both ends of the floor.  Besides his 14.3 points per game, he’s 13th in the NBA in steals and is the Celtics’ third best rebounder behind Jared Sullinger and Amir Johnson.  He’s also third on the team in blocked shots behind those same two guys.

People expected this Celtics team to be competitive, the question was how competitive and with what consistency?

Unfortunately that question hasn’t really been answered yet as the C’s have been the definition of streaky.  Sometimes they look like one of the best teams in the East only to lose to an inferior opponent the next game.  Before winning 8 of their last 11, they had lost 6 out of 7.

Just when it looked like they were playing with some consistency, their five game win streak was snapped Sunday night by an Orlando Magic team that had previously lost eight in a row.

They’ll look to bounce back and make it 9 wins in 12 games against the Knicks in New York tonight.