Talking to the media after the a 129-98 loss in Denver Tuesday night, Gerald Wallace stated the following:

“I’m very surprised. Right now, we’re the team that’s all talk. We talk about how we want to get better. We talk about things we need to do to get better. It’s easy to go out and practice and do it. Practice doesn’t really apply to anything with making yourself better. When they turn them lights on, when it really counts, when it’s about the team and making the team better and trying to win as a team, we don’t do it.”

Strong words from a guy who is averaging 4 points per game and shooting 34% from the free-throw line.  Regardless, I think he got his point across.

A day after being embarrassed by the Nuggets, the Celtics showed some fight last night in a 111-105 loss to Doc Rivers’ Clippers.

The C’s were a little shaky out of the gates and found themselves down 28-12 in the first quarter.  They were able to bounce back and headed into halftime trailing by just four, thanks to 14 first-half points by a determined Jordan Crawford.

Boston was actually able to grab the lead in the third before Blake Griffin decided to take over.  Griffin finished with 29 points and took 17 foul shots.  His impressive performance was highlighted by a vintage Blake Griffin posterization of Kris Humphries where he propelled himself towards the hoop by pushing off of Hump’s head, thus preventing Hump from jumping to contest the dunk (offensive foul).  Blake then threw the ball into the hoop without actually touching the rim, which is somehow still classified as a dunk.  To top it all off, Griffin gave Humphries quite the stare down, as if to remind everyone that his skill set includes not only making hilarious commercials, but also forcefully dunking basketballs. 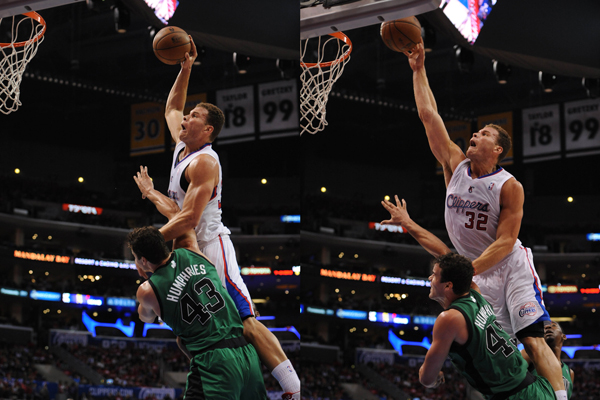 Jamal Crawford did what he’s been doing his whole career by knocking down some clutch threes and pushing LA’s lead to 16 with just over six minutes remaining.  The Celtics didn’t quit just yet as some key steals brought them to within four points with 19 seconds left.  They were unable to draw any closer after Jerryd Bayless missed a contested layup, however, and the Clippers held on to win 111-105.

Avery Bradley finished with the game with 24 points on 10-18 shooting.

Jeff Green recorded a double-double with 15 points on 5-12 shooting and 11 rebounds.  A solid performance but once again he lacked aggressiveness.  There’s no reason that Bradley and Crawford should be taking more shots than Green on a nightly basis.

Jared Sullinger continues to be bothered by his left hand as he was only able to contribute two points and three rebounds off the bench.

In his second game as a Celtic, Jerryd Bayless had 11 points, five assists, and three rebounds.

Jordan Crawford finished with 24 points on 7-17 from the field and a near-perfect 10-11 from the free-throw line to go along with eight assists.  However, Crawford also committed five turnovers and appeared to slowly bring down the morale of the entire team with his ball-hog tendencies down the stretch in the fourth quarter.

The Celtics have now lost nine of their last 10 and find themselves in third place in the Atlantic behind Toronto and Brooklyn.

Their next game is at Golden State tomorrow night as they take on Steph Curry and the Warriors.  Tip-off at 10:30 pm ET.