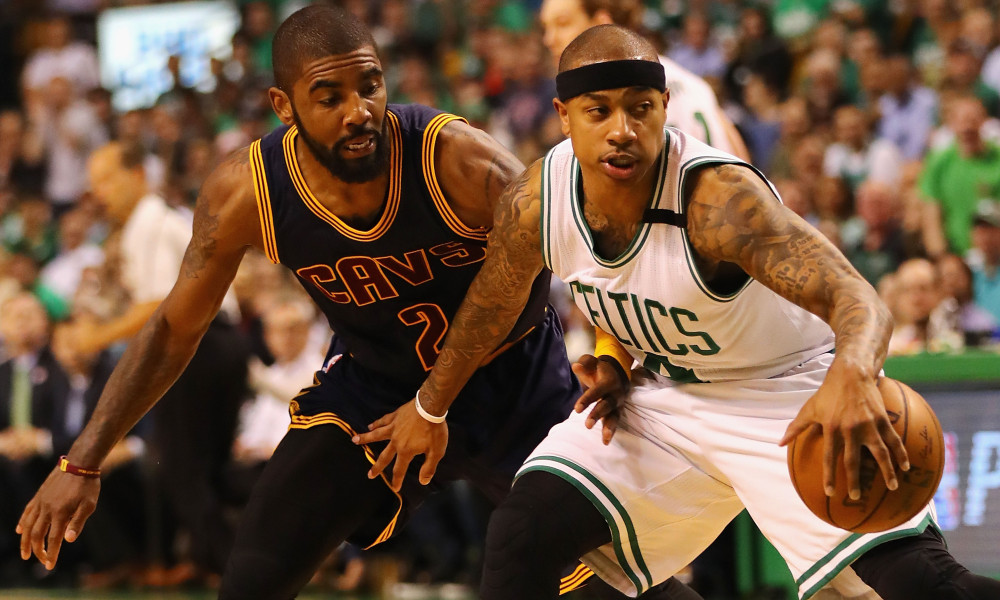 Shortly after a swirl of a rumors began to surface on Tuesday night, the Celtics and Cavaliers shocked the basketball world with a blockbuster trade.

Isaiah Thomas, “The Little Guy”, the 5’9″ spark-plug who transformed himself from bench scorer to MVP candidate right in front of our eyes and subsequently stole our hearts in the process over these last three years.  The guy who single-handedly upgraded the Celtics from team that was 41-87 to start the Brad Stevens Era to a team that had the best record in the East and made it to the Conference Finals last season.

That guy is gone, and it’ll be tough to swallow for a little while.  Just last week he was at Patriots training camp “watching greatness” and receiving praise from Robert Kraft for the job he’s done with the Celtics.

Along with Jae Crowder, Ante Zizic, and the 2018 first round pick that was originally acquired from the Brooklyn Nets, IT was shipped to Cleveland Tuesday to join forces with LeBron.

In return the C’s got Kyrie Irving.  The Isaiah vs. Kyrie debate has been a popular one among Celtics fans in the last year.  Many have said that Thomas is better, although it’s hard to believe bias didn’t play a role.

The biggest factor in this decision for Boston was likely age.  Thomas is 28 years old.  Kyrie is 25.  When Thomas was 25, he was traded from Phoenix for Marcus Thornton and a first-round pick.  Kyrie has already established himself as a superstar and hit one of the biggest shots in NBA Finals history.  It’s really not hard to determine which player has more upside and will continue to produce for a longer period time.

Unfortunately, he also thinks the Earth is flat.  That’s not something I can get on board with, but one of my Twitter followers had a solid suggestion:

YEAH… There is that. But it's okay, Danny can take him over to MIT & Harvard & they'll explain in short, simple words, how "Science works

Kyrie joins Gordon Hayward and Al Horford to form the Celtics’ newest Big Three in hopes of dethroning his former team in the Eastern Conference.  The question now becomes whether or not Danny Ainge gave up too much to acquire him.

Crowder is a big loss.  The Celtics already dealt their best defensive player in Avery Bradley last month, and Jae is another guy who’s been known to lock down elite scorers.  This leaves Marcus Smart and Terry Rozier as the best perimeter defenders on the team.

Zizic was trash in the Summer League and has done nothing to prove he’s capable of playing in the NBA, so we won’t worry about that one.

The 2018 pick could prove to be costly depending on where the Nets finish, but numerous sources have reported that LeBron plans on leaving Cleveland after this season.  If that’s the case, the Celtics win this trade by landslide in the long run.

As for this year?  Tough to predict, but we know who the two best teams in the East are and we can expect a much more thrilling Conference Finals than the lopsided five-game Cavs victory we saw three months ago.  That’s a step in the right direction.