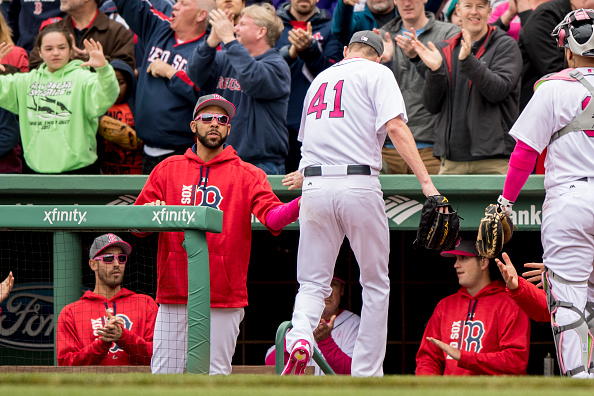 It takes a certain type of person to thrive in their first season as a professional athlete in Boston, especially as a pitcher for the Red Sox.  So far in 2017, Chris Sale has provided the necessary guidelines to accomplish just that.

Sale has been almost unhittable so far, so it’s not like there have been many excuses to make.  But listening to him pick himself apart in postgame interviews has been a breath of fresh air.  The man is never afraid to take accountability for his mistakes.  In fact, he’s usually the first one to point them out.

This is the exact mentality that has been missing from the the other lefty “ace” the Sox acquired two offseasons ago.  Unfortunately, some people just aren’t built to compete in high-pressure situations.

Chris Sale is succeeding in Boston because he is the polar opposite of David Price.  He’s doing everything that Price didn’t do in his debut season with the team.

The biggest difference between these two guys has absolutely nothing to do with pitching ability and everything to do with how they carry themselves.  If you want proof, look no further than their postgame interviews after starts.

Price hasn’t been terrible during his time with the Red Sox, but he’s had his share of issues in dealing with criticism from the media and fans.  Not to mention he has a hard time being humble enough to criticize himself when necessary.

A couple weeks ago, CBS Boston’s Michael Hurley compiled a list of all the things David Price has said or done during his time with the Red Sox that prove he isn’t cut out for Boston.  They include getting his feelings hurt by no-names on Twitter and boasting about his two long-forgotten career playoff wins (as a reliever) immediately after getting rocked by the Indians in the ALDS last year.  He’s already had a mental breakdown this year because the media is consuming his thoughts so much that he feels the need to hide from them.

On the other hand, Chris Sale criticizes himself in front of reporters when he doesn’t even have to.  He could go out and have a nearly perfect start, but he’ll still manage to hold himself accountable for the one or two mistakes he made.

We saw this on Wednesday night.  Sale was dynamite through 8 innings, allowing just 2 hits and 1 earned run.  In the 9th, he gave up a one-out, two-run homer to Jorge Bonifacio followed by a single to Brandon Moss, forcing John Farrell to pull him bring in Fernando Abad for the final two outs of the game.

In his postgame interview, Sale gave us a quote that epitomizes his persona and shows the level of perfectionism that makes him as dominant as he is.  These were his thoughts on not being able to finish the game after going out for the 9th:

Now I want you to think long and hard about what David Price would have said in that same situation.  Price goes out and dominates for 8 innings, gets pulled in the 9th and still wins the game.  There is ZERO chance that he would be pissed at himself the way Sale was.  He would be thinking about those 8 great innings with a big smile on his face.

David Price gets offended when you criticize him after a bad start.  Chris Sale gets offended when you praise him after a good start because he wasn’t as perfect as he wanted to be.  David Price has not nearly lived up to his $217 million salary.  Chris Sale has been everything we wanted and more on the mound.  If you don’t think there’s a correlation between their attitudes and their performances then you need to look a little closer.

Mental toughness equals success in Boston.  The moment you let any sort of criticism get to your head it all starts to pile on and that’s the beginning of the end.  David Price can be a solid pitcher for the Red Sox, but he’ll never be an ace in this city because he doesn’t have the same mentality as someone like Chris Sale.  He doesn’t want the pressure because he can’t handle it.  Sale invites the pressure and uses it to fuel his fire.  The results tell the rest of the story.