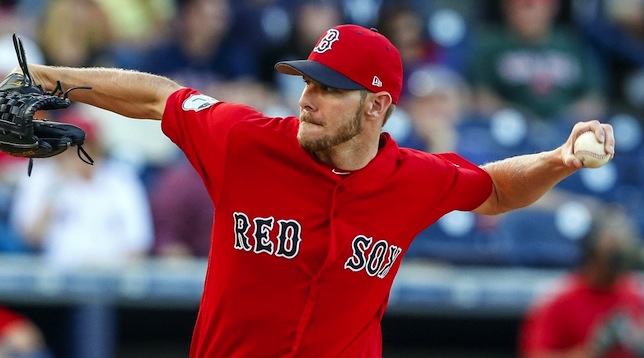 The Red Sox’ newly acquired ace Chris Sale has done and said all of the right things during his short time with the team so far.  Joining a potential World Series contender after never making the playoffs in his seven years with the White Sox certainly has the former Cy Young finalist in high spirits:

“I’m the happiest I’ve ever been,” Sale told USA Today.  “What more can you ask?”

As fans, there’s nothing more we can ask for than a great player who’s excited to be here and ready to face the pressure that comes with playing in Boston.  We’ve seen what happens when guys aren’t mentally prepared to live up to the high expectations that we set for our athletes.  Carl Crawford, for example.

This won’t be the case with Chris Sale:

“I can’t tell you how excited I am,” he said.  ” This is everything I wanted.  I’m going to an organization very rich in history, and even more recently, a very winning tradition.  And I get to pitch at Fenway Park, one of the greatest wonders of the world.  How can you beat this?’’

You can’t beat it.  And opposing hitters might have a hard time beating Sale this year if Spring Training is any indication.  His positive attitude translated into five dominant March outings down in Florida.

Now if there’s one thing I’ve learned about sports, it’s that no matter what happens in preseason games, they don’t mean shit.  They mean less than nothing.  Rick Porcello had a 9.77 ERA in Spring Training last year and went on to win the AL Cy Young.  He had a 7.07 ERA this year and is set to start for the Sox on Opening Day.

But for a guy just getting settled in with a new team, you’d like to see him having some solid innings in March rather than getting lit up every time he takes the mound and having us all wondering if there’s something wrong with him.

Chris Sale assured us that he’s feeling 100%.  The 28 year-old lefty struck out 26 batters and walked just two in 21 innings during Grapefruit League play, finishing with a 2.57 ERA.

His real “first test” comes when he makes his regular season Red Sox debut in Boston’s second game, April 5th at Fenway against the Pirates.  But it’s hard not to be pleased with what we’ve seen so far.