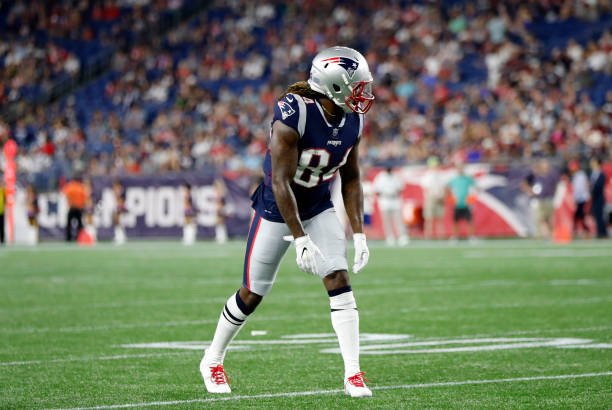 Before you get too excited, he earned those accolades as a result of his performance on special teams.  In his five years in the league, Patterson has racked up over 4,000 kick return yards while averaging 30 yards per return. Of his five touchdowns, three have been 100-plus yards.

While excellence on the return team might endear him to coach Belichick, it doesn’t exactly move the needle for a fan base that’s wondering who will pick up the slack after the departure of Brandin Cooks and absence of Julian Edelman for the first four weeks of the season.

We can already scratch Malcolm Mitchell and Jordan Matthews off that list.  After an excellent rookie year in 2016, Mitchell missed all of 2017 and was cut last week when his lingering knee issues began to resurface.  Matthews also had a brilliant start to his career, tallying 1,869 yards and 16 touchdowns with the Eagles in his first two seasons in 2014 and 2015.  Unfortunately 2016 and 2017 were shortened by injuries, and a tweaked hamstring just a few months into his Patriots career was enough for New England to cut ties with the 26 year-old.

Of course there’s the addition of Eric Decker.  But at age 31, his numbers saw a steep decline last year after he missed most of 2016.  Not to mention he’s looked shaky in camp.

With limited options, Cordarrelle Patterson could be a guy who Tom Brady will try to turn to under pressure.  His speed and athleticism are undeniable, and if he can combine those attributes with proficient route running and good hands then he can be the threat that the Pats will desperately need.

Patterson showed promise as a pass-catcher in his rookie year in 2013 with 469 yards and four touchdowns, but he has yet to match those numbers since.  After four years in Minnesota, he spent 2017 as an Oakland Raider and had the least productive output of his career thus far.  But Bill Belichick traded for Patterson this off-season with the intention of changing his track record as a one-dimensional player.  After acquiring him in April, Bill’s message to the 27 year-old was simple: “We’ll make you the player you should be.”

Through three weeks of training camp, that prospect is beginning to seem realistic. He’s been working diligently with retired receivers coach Richard Mann, the same guy who helped Antonio Brown become a superstar.  The results appear to be showing.

“He’s a hard-working guy,” said Belichick. “He’s out there every single day. He’s improved every day. He has skills in offense and the kicking game in a number of different areas, return skills, coverage skills, blocking skills, catching skills.”

In the Pats’ first preseason game against the Redskins at Gillette last Thursday, Patterson backed those compliments from his coach by making this highlight reel catch:

All signs point to Cordarrelle Patterson being a potential fantasy football sleeper and integral part of a somewhat depleted Patriots offense. Don’t be surprised to see 84 making some appearances in the end zone this year.