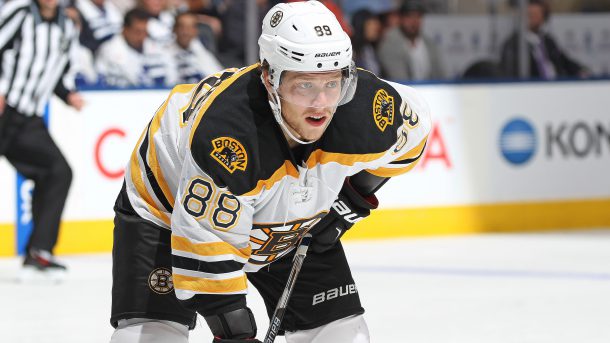 Three games into the Bruins’ season, 20 year-old David Pastrnak is already tied for the most goals in the NHL with four.  He’s also tied for third in points with six.

In the Bruins’ 6-3 win over the Columbus Blue Jackets on opening night, Pastrnak’s performance was overshadowed by Brad Marchand, who was the first Bruin since Phil Esposito in 1973 to record five points in the first game of the season.

Pastrnak had four points of his own with two goals and two assists:

In the Bruins’ 4-1 loss to the Maple Leafs in Toronto last Saturday, the B’s lone goal was scored by none other than Pasta:

And then in the Bruins’ 4-1 win over the Winnipeg Jets in their home opener on Monday, which just happened to be “National Pasta Day”, Pastrnak netted his fourth goal of the season to take a 2-1 lead in the second period.  It would eventually turn out to be the game-winner.

Based on what we’ve seen so far, it’s hard to argue that this kid has a really bright future ahead of him.  I know Bruins fans would like to see him in black and gold for many years to come.