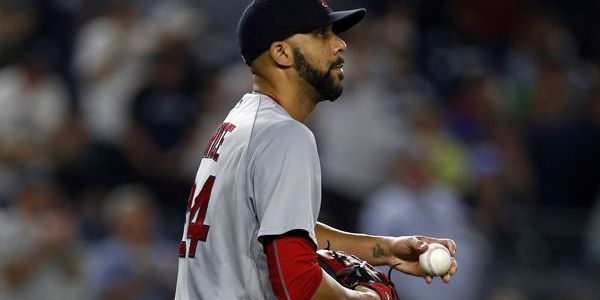 His record as a starting pitcher in the postseason is now 0-8 after getting lit up by the Cleveland Indians in game two of the American League Division Series.  After retiring the first four batters he faced, he allowed three consecutive one-out singles in the bottom of the second to Carlos Santana, Jose Ramirez, and Brandon Guyer.  The third single by Guyer drove in a run and set the stage for Lonnie Chisenhall to open things up with a three-run bomb, extending the Indians’ lead to 4-0.

Price was pulled from the game in the fourth inning after allowing another single to Guyer and walking Roberto Perez.  When all was said and done, our “ace” went three and a third, surrendering six hits and five earned runs.

With Matt Barnes on the mound in the bottom of the sixth, Brandon Guyer collected his third hit of the day and was later driven in on a sacrifice fly by Rajai Davis.

Offensively, the Sox had absolutely no answer for Corey Kluber.  The Cleveland starter went seven innings, allowing three hits, no runs, and striking out seven.  The kind of performance we were hoping to see from our own starting pitcher.

Kluber eventually getting pulled from the game didn’t seem to wake up Boston’s bats either, as the three hits he allowed were the only three hits they were able to put on the board.

The colossal struggle continues for Jackie Bradley Jr., who’s 0-for-6 with five strikeouts so far in the series.  He’s had the hardest time by far, but nobody was able to produce in Friday night’s loss.

There’s no excuse for their the Red Sox’ poor performance at the plate, but it’s hard to get any momentum going when your starter puts you in a hole in the third inning.

Now we face elimination as the series makes its way to Fenway on Sunday afternoon.  The season is on the shoulders of Clay Buchholz, who will hopefully have one of his good nights so we can at least make things interesting.  I know I speak for Red Sox fans everywhere when I say this hasn’t been fun.