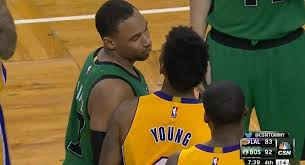 In case you missed it, Nick “Swaggy P” Young got himself into a minor scuffle/verbal exchange with Jared Sullinger when the Lakers visited the Celtics on Friday.  Young was clearly shaken up by something that Sully said and tried to retaliate by blatantly pushing him in the back while he was under the basket.  Fortunately, it would take about four Nick Youngs to bring down Jared Sullinger, so Sully was unharmed.  Here’s what Young had to say about the incident:

“I don’t like when people talk trash and then they get the W after and they feel like they did something,” Young said. “I don’t like that feeling.”

What exactly did Sullinger do that bothered Young?

“Just hitting shots, talking trash, looking at the bench,” Young said. “It made me feel like I was a punk or something. I don’t stand for that.”

First things first, Swaggy.  When you say that you don’t like when people trash talk and then get the W and feel like they did something, what exactly do you mean?  They did do something, they got the W.  The last time I checked, the point of trash talking is to gain a competitive edge in hopes of helping your team win the game.  That’s exactly what Sully did.  Secondly,  I don’t know if you knew this, but you’re pretty much widely regarded as the biggest punk in the NBA right now.  You walk around acting like a superstar when, in reality, you would be no more than a 6th man on a good team.  So when you say that Sullinger made you feel like a punk, what you’re really saying is that he exposed you for who you truly are and whatever he said to you made you realize that you’re a punk.  So either Jared Sullinger is the greatest trash talker in the game and is able to make opponents question their own persona, or Nick Young is an insecure punk with absolutely no backbone.  Seriously, in all my years of following sports I can’t recall an athlete ever admitting that they were affected by an opposing player’s words the way that Nick Young just did.  Now every team in the NBA knows exactly how to slow this guy down.  Look for KG to completely incapacitate him with words and maybe even bring him to tears the next time the Lakers play the Nets.

PS: I have no idea where the Swaggy P nickname came from and I don’t care to look it up.  Regardless of what it means it’s the worst nickname in the history of professional sports.

Here’s the video of Young and Sullinger’s altercation: