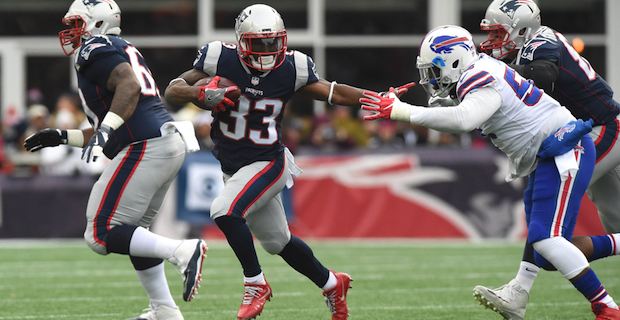 The Patriots beat the Bills 37-16 at Gillette on Sunday afternoon, but the game was a little tighter than the final score indicates.  Things were all tied up 13-13 at halftime before Dion Lewis took over and spent the entire second half slicing through the Buffalo defense.

Two field goals each for Stephen Hauschka and Stephen Gostkowski, a ridiculous one-handed touchdown catch from Rob Gronkowski, and a pick-six by the Bills’ Jordan Poyer led to the tie at the half.

Buffalo took a 16-13 lead on another field goal at the start of the third quarter before the Pats responded with 24 unanswered points.

They finally got some separation after another Gostkowski field goal and a touchdown from Mike Gillislee.  Then Dion Lewis provided the daggers with two touchdowns in the fourth.  Lewis finished the day with 153 yards and those two TD’s on 29 carries.

Thanks to Jimmy Garapollo putting up the most points that any team has against the Jaguars this season and dropping Jacksonville to 10-5, the Patriots now have a first-round postseason bye for the 8th consecutive season.

New England will wrap up their regular season against the Jets in Foxborough next Sunday.