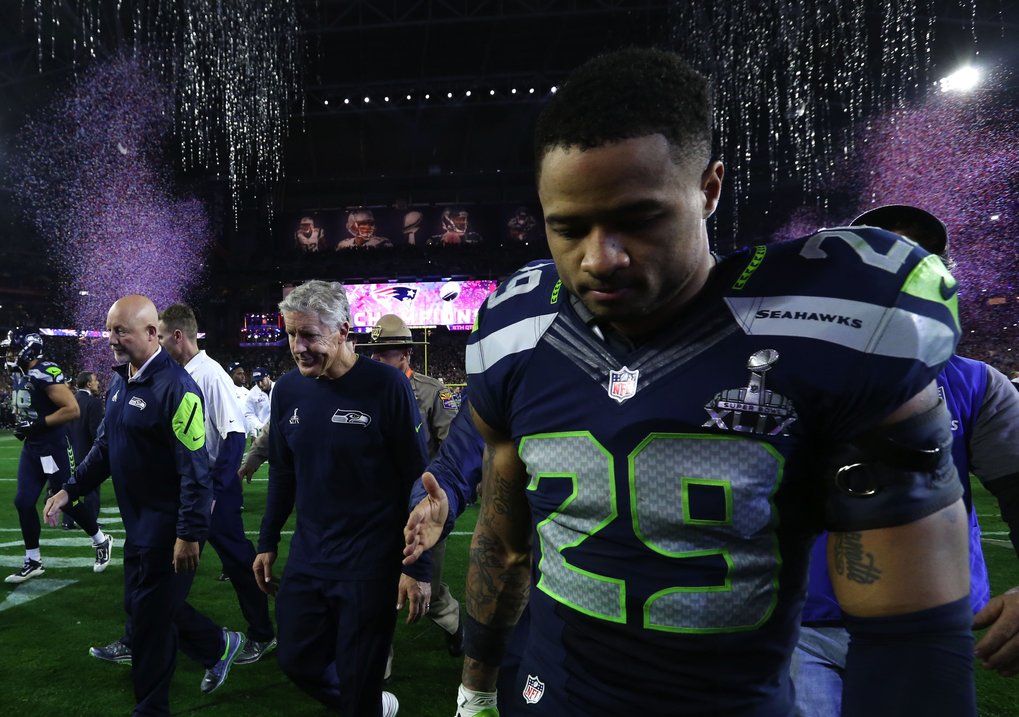 It’s been almost two years since Malcolm Butler intercepted Russell Wilson at the goal line to seal Super Bowl 49, but Seahawks safety Earl Thomas clearly isn’t over it yet.

While Tom Brady carved up the Houston Texans in the second half Saturday on the way to his sixth consecutive AFC Championship appearance, Thomas watched from his couch and tweeted about the Patriots’ weak schedule:

Tom Brady has the easiest route… put his ass in our division and see what he does!!! #salty!!

That last hashtag describes his mood perfectly.  Earl is the definition of salty right now, and tweets like this are a bad look for a guy whose team was bounced by the Atlanta Falcons earlier in the day.  I understand that his season coming to an end is still fresh in his mind and he’s definitely not thinking straight, which is exactly why he should be avoiding all social media until he calms down a little.  Apparently that was too much to ask, so now he’s making a complete fool of himself.

Earl was so deep in his feelings that he just had to respond to this Patriots fan who reminded him of his blown coverage on Danny Amendola’s touchdown in the Super Bowl.  Earl defended himself by saying he was playing through an injury in that game and that he “owned Tom Brady” in the Seahawks’ win over the Pats this year.  Which would be impressive, except Tom is in the AFC Championship and Earl is at home so it doesn’t fucking matter at this point.

So here’s Earl Thomas bragging about his performance in week 10 while Tom Brady continues his road to a fifth Super Bowl ring.  Meanwhile, Earl has the same amount of rings as guys like Trent Dilfer and Brad Johnson:

Did you watch the game this year I owned Tom Brady!! That BS you showing I was hurt trying to help my team. https://t.co/ZB6ts0ObuQ

He then stated that us Patriots fans are brainwashed, to which someone gave the best possible response that you could imagine:

Sorry, Earl.  You brought this upon yourself.

After he was finished venting, he said that he just hates to see the Seahawks come up short and then watch their “biggest rivals” win:

I wasn’t sure if Seattle considered the Patriots to be their “biggest rivals” but I guess it makes sense considering the Pats single-handedly ended the Legion of Boom’s short-lived reign a couple years ago.  They thought they had a chance to be the NFL’s new dynasty before Tom Brady and Malcolm Butler happened in the fourth quarter of Super Bowl 49.

That can’t be easy to swallow, and apparently Earl Thomas is still having a hard time getting it to stay down.  He might just puke all over himself when Brady raises that Lombardi Trophy on February 5th.