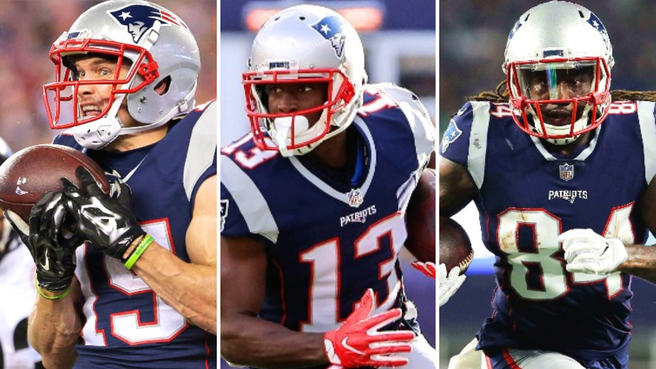 That’s what Tom Brady had to say about the Patriots receiving corps this offseason.  In case you haven’t been paying attention, this is what he was referring to:

June 7th:  It’s announced that Julian Edelman will be suspended for the first four games of the 2018 season for violating the league’s policy against performance-enhancing drugs.

August 1st:  Newly acquired Jordan Matthews is released with an injury settlement following a hamstring injury that he suffered three days prior.

August 6th:  After missing all of 2017 with a knee injury and undergoing a procedure in July, Malcolm Mitchell was waived.

August 22nd:  After being acquired by the Patriots in December and hardly seeing any action, Kenny Britt was released.

So here we are.  A little over a week away from the season opener against the Texans at Gillette and the Pats’ best active wide receivers are Chris Hogan, Cordarrelle Patterson, and Phillip Dorsett.  Not exactly the weaponry you need to get the most you can get out of a 41 year-old quarterback.  I know Tom Brady isn’t your average 41 year-old, but succeeding with this crew might be the toughest task he’s been faced with over his 18 years as a starter.

The closer we get to September 9th, the less likely it seems that the Pats will add Dez Bryant or Golden Tate or any of the rumored names that we’ve heard over the last few weeks.  Deciding how the their offense will survive in the first four weeks of the season is like guessing how the Red Sox will fare in the playoffs.  There’s clearly a weakness there, but maybe they have enough strengths to overcome it.  They do still have the best quarterback and tight end in the game.

As for the wideouts, Hogan has expressed a desire to take on more of a leadership role, Patterson has had an excellent training camp and preseason, and Brady has praised Dorsett for his work ethic and development.  This is certainly a big opportunity for someone to step up and make a name for themselves.  If that doesn’t happen, we could be looking at the worst start to a season in the Brady/Belichick era.