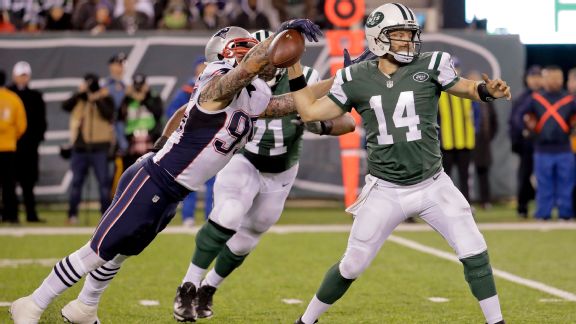 It’s no secret that the Patriots’ defense hasn’t exactly been their strength thus far in the 2016 NFL season.  Although we saw their cornerbacks play well in week 11’s win against the 49ers, they still had some glaring issues up front.

In Sunday afternoon’s win over the Jets at MetLife Stadium, the Pats appeared to have cleaned up some of those deficiencies.  The Jets aren’t exactly an offensive juggernaut, but they’re better than San Francisco and New England’s effort on defense was overall much improved from last week.

While the corners didn’t have quite as successful a week in regards to pass coverage, they did come up with some timely plays.  Like this one by Malcolm Butler with just under 10 minutes to go in the first half and the Patriots trailing 10-3.  After a long completion, Malcolm punched the ball out of Robby Anderson’s grasp and recovered the fumble:

This play set up a Tom Brady to Malcolm Mitchell touchdown to tie the game at 10.  On a day when the offense took a while to start clicking, they certainly benefited from some notable performances on the defensive side of the ball.

The most improved aspect of the Pats’ defense was the play of the line, who delivered the two biggest moments of the game.

First there was Alan Branch, who got up high to block a field goal towards the end of the second quarter, preventing the Jets from regaining the lead before halftime:

The Patriots were able to take a 13-10 lead in the third quarter on a 29-yard field goal by Stephen Gostkowski, who had missed one from 39 earlier in the game.

In the fourth, Ryan Fitzpatrick hit Quincy Enunwa in the back of the end zone to give the Jets a 17-13 lead.

After Brady was able to orchestrate yet another a vintage game-winning drive, marching the Pats down the field from their own 17-yard line and eventually finding Mitchell for his second touchdown, it was Chris Long’s turn to make his presence felt.

Long came through with arguably the most important play of his eight-year NFL career on New York’s last drive of the game, recording a strip-sack of Ryan Fitzpatrick to seal the 22-17 win in the Meadowlands.  It marked the second time in just four years that the Patriots closed out a win over the Jets with a strip sack.  The first one came courtesy of Rob Ninkovich when he took down Mark Sanchez at Gillette back in 2012:

With the win, the Patriots improved to 9-2 on the year, making this their 16th consecutive season with a winning record.  In the history of the NFL, only the Dallas Cowboys have had a longer streak with 20 straight winning seasons from 1966-85.

Tom Brady continues to make history, as he’s now tied with Peyton Manning for the most wins by a quarterback with 200.  The only difference is that he’s done it in 261 games, whereas Peyton took 292 to reach the milestone.  Brady also has two more Super Bowl rings, but you already knew that.

TB12 and the Pats will look to continue their winning ways next Sunday at 1 pm when they take on the 4-7 LA Rams at Gillette.