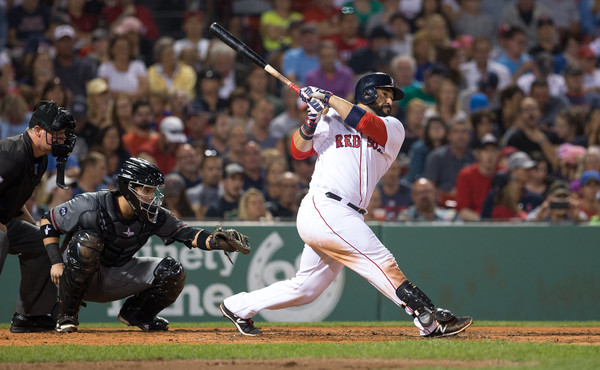 Through 141 at-bats this season, Sandy Leon is batting .383.  That’s 21 points better than Mike Piazza’s .362 in his legendary 1997 campaign, the greatest offensive season ever by a catcher.  Of course you can make the argument that Piazza’s year was more impressive because Leon hasn’t played a full season, but the fact that Sandy is even being mentioned with the best offensive catcher of all-time is somewhat of a miracle.

There’s no question that Leon has been a savior for the Red Sox this year.  And it’s safe to say that no one saw it coming.  In Spring Training, the battle for starting catcher was between Christian Vazquez and Blake Swihart.  Then there was also Ryan Hanigan.  I personally thought Vazquez was the best option because his defensive talents are unrivaled in all of baseball, but unfortunately his .226 batting average landed him in Pawtucket.

Sandy Leon wasn’t on anyone’s radar.  We’re talking about a guy who’s been in the league since 2012 and had never accumulated more than 21 hits prior to this season.  Now, since being recalled in June, he has 54 hits in 45 games.  If it weren’t for Mookie Betts, we’d be talking about this guy as the Sox’ MVP.

Unfortunately he needs to average almost eight at-bats per game for the rest of the year in order to qualify for the batting title, so there isn’t much chance that he’ll snatch the crown from the Astros’ Jose Altuve.  But despite not walking away with any awards, Sandy Leon is without a doubt one of the best players in baseball in 2016.