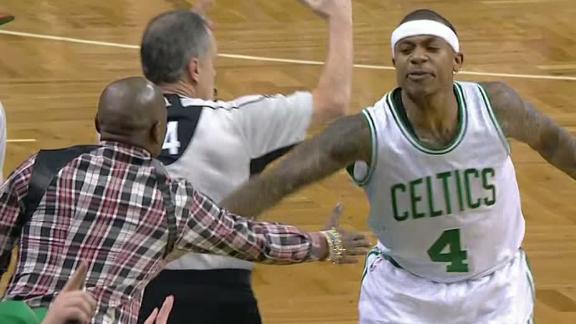 Isaiah Thomas, otherwise known as the best scorer in the Eastern Conference, continued his MVP campaign on Wednesday night when he dropped 20 fourth quarter points in a win over the Washington Wizards.  As usual, every bucket was needed.

With just under eight minutes remaining in the game and the Celtics trailing 91-90, IT set the Garden on fire by grabbing five quick points, forcing Washington to call a timeout.  He began the sequence with a Bird-esque putback after a missed three:

Right after the timeout, Isaiah continued his run with another three to extend the lead to seven.  To make the moment even more dramatic, he buried the shot right in front of his friend Floyd Mayweather, who immediately stood up and high-fived him.  I’m not a Floyd fan by any means, but it’s moments like these that make you realize we have a superstar in Boston:

Isaiah with the deep three and then a high five from Floyd Mayweather @Isaiah_Thomas @FloydMayweather pic.twitter.com/H9nhYhXkma

Isaiah continues to be the second best fourth quarter scorer in the NBA behind Russell Westbrook.  After his 20 in the fourth, he finished the game with 38 as well as 6 rebounds and 5 assists.  As soon as the game was over, Floyd asked for another jersey to add to his collection:

Isaiah still leads the East with 28.2 points per game and has now moved up from fifth to fourth in the NBA.  Of the three guys ahead of him, Anthony Davis is the only one with a higher field goal percentage.  IT’s outstanding play has led the Celtics to an 11-3 record in their last 14 games after starting the season 13-12.