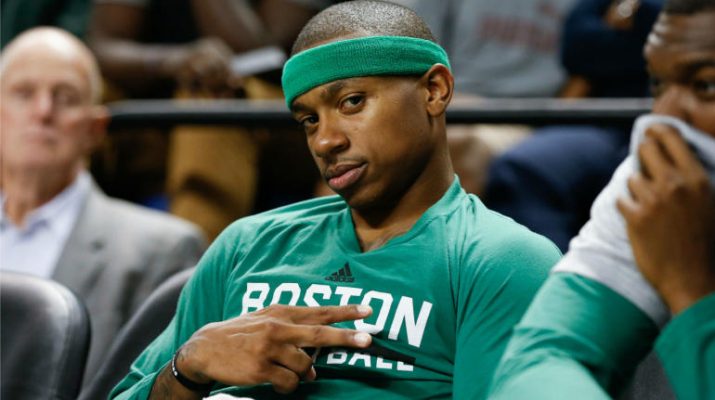 The Celtics have had some ups and downs this season as a result of injuries, which forced Brad Stevens to do a lot of experimenting with lineups early on.  Thanks to everyone being healthy, the recent 5-1 surge in the last six games is a more accurate representation of this team’s capabilities and has catapulted them to the top of the Eastern Conference where they belong.

After beating the Knicks at Madison Square Garden on Christmas, Boston is now 12-4 on the year when their starting five is intact.  They’re 18-13 overall, which is good for the third seed behind Cleveland and Toronto.  Everything is finally clicking, and the best part is that there’s still plenty of basketball left to be played.

On the offensive end of the floor, the leader of that starting five has undoubtedly been Isaiah Thomas.  Coming off of his first career All-Star appearance in 2015-16, the 5’9″ point guard has taken another step forward and is beginning to gain recognition as an NBA superstar.

That recognition was justified on Monday when Isaiah was named the Eastern Conference Player of the Week in a week that included a large chunk of the Celtics’ current win streak.  Thanks to the stellar play of IT4, the C’s were able to go 3-1 against four likely playoff teams in the Grizzlies, Pacers, Thunder, and Knicks.  The three games that they won were all on the road.

Isaiah’s performance over the course of the week was nothing short of spectacular.  He was first in the East in points per game with 33.3 on a ridiculous 48.8% shooting, which is an impressive field goal percentage for anyone, let alone the shortest player in the NBA on his way to 30+ points.  He also managed to shoot 90.7% from the free-throw line while dishing out 7.3 assists per game.

The highlight of IT’s incredible week was his career-high 44 point showing in Tuesday’s overtime win against the Grizzlies in Memphis.  After putting up just eight points in the first half, he somehow ended up having one of the most efficient games in the history of basketball.  In 18 minutes in the second half he dropped 29 points, hitting six threes and going 11-11 from the free-throw line.  Then in OT, he added another three and was 4-4 from the line.

The final stat-line in the best game of the 27 year-old Thomas’ career was 44 points, six assists, three rebounds, two steals, and a block.  He became one of just four players in NBA history to score at least 44 points while only taking 16 shots, joining Amare Stoudemire, Gilbert Arenas, and Adrian Dantley who did it twice.

Here are the highlights from the legendary performance:

Westbrook isn’t the only established superstar who Isaiah is competing with this year.  IT is currently sixth in the NBA in points per game with 27, putting him ahead of guys like Kevin Durant, LeBron James, Kawhi Leonard, Jimmy Butler, Steph Curry, and Kyrie Irving.

So how has Isaiah managed to get himself in the conversation with all those great players?  Well, his three-point percentage is the lowest it’s been in his five seasons in the NBA, so you know outside shooting hasn’t played a role.

The key has been getting to the line and converting when he gets there.  Of the top 10 scorers in the league, Isaiah has the second highest free-throw percentage behind Kawhi Leonard and has the fifth most attempts behind Westbrook, Anthony Davis, Demarcus Cousins, and James Harden.  And if you watch the Celtics, you know that number should be higher due to the amount of times that the refs swallow their whistle when Isaiah gets pushed around on his way to the basket.

Being a great scorer means more opportunities for assists, and Thomas has excelled in that department as well.  His 6.2 per game average is good for 13th in the NBA and 10th among point guards.

He said last year that he wanted to go down in history as the greatest player ever under 6 feet, and The Little Guy has made giant strides towards that goal this season.  Not bad for a someone who fell to the last pick of the draft five years ago.