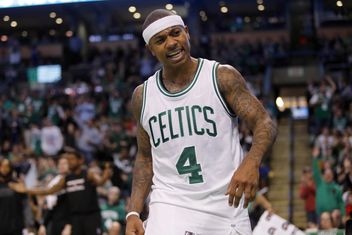 The former last pick of the draft has faced his fair share of skeptics from the time he was a standout high school player in Washington.  Even after making the All-Star team last year and establishing himself as one of the top scorers in the league through the first couple months of this season, there are still plenty of basketball fans who are reluctant to put him in the same category as guys like Steph Curry and Kyrie Irving.  But Isaiah’s performance in the Celtics’ win over the Miami Heat at TD Garden Friday night was the type of performance that only elite players are capable of.

Paul Pierce’s career-high for points was 50 back in 2006.  On Friday night, Isaiah Thomas dropped 52, the most by a Celtic since Larry Bird in 1985.  He scored 29 of his team’s 31 points in the fourth quarter, the most points in a quarter in Celtics history.  The most that Wilt Chamberlain scored in a quarter in his 100 point game was 31.

Check out the highlights here:

Most importantly, the Celtics won a close game, which means every single one of those buckets was crucial.  Isaiah is the second best fourth quarter scorer in the NBA this season after Russell Westbrook.  He recently had a game in which he had eight points at halftime and finished with 44 on only 16 shots, the fourth player ever to score that many points with so few attempts.  The Celtics won that one too.

So it’s time to admit that this guy just defies all logic and can do things that we didn’t think were possible for anyone under six feet.  You won’t be the first person who was wrong about him.  Like I said, he was taken 60th in the draft.  Now he’s the shortest player in the league and one of the most efficient scorers the game has ever seen.  His height is not a detriment on offense.  It should be, but it’s not because no one is as quick as him or as crafty around the basket.  He simply can’t be guarded, and there’s nothing you can do about it.