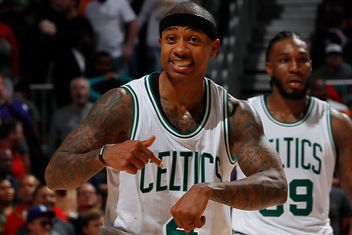 On the final night of voting for the 2017 NBA All-Star Game, Isaiah Thomas gave us one more reason why he should be the starting point guard for the Eastern Conference in New Orleans next month.

The best scorer in the East once again led the Celtics to a win Monday by taking matters into his own hands on the offensive end.  He dropped 35 points in just 31 minutes, including 17 in the fourth quarter to lead the C’s to a 108-98 victory over the Charlotte Hornets at TD Garden.

The Little Guy has now scored 20+ points in 25 straight games, the first Celtic to do so since Kevin McHale in 1986.

Here are the highlights from his most recent performance:

Isaiah is not only leading the NBA in fourth quarter scoring this season, he has a higher field goal percentage in the fourth than the next eight players behind him on that list.  Even more ridiculous, his 10.1 points per fourth quarter is the highest average by any player in the last 20 years.

So forget the height thing.  If you’re still talking about the height thing then you haven’t been watching.  Ignore the fact that the average NBA player is almost a foot taller than Isaiah and realize that he actually has an easier time getting the ball in the basket than almost everyone else in the league.  Just accept that he has defied all logic by being 5’9″ and developing into the best clutch scorer in basketball.

After the win over Charlotte, the Celtics are now 13-3 in their last 16 games, thanks in no small part to the elite play that we’ve seen from Isaiah on a consistent basis.  Due to his incredible contributions to his team’s recent success, IT has entered the top five in the MVP race behind James Harden, Russell Westbrook, Kevin Durant, and LeBron James.

I don’t think anyone saw that coming two years ago when Danny Ainge acquired him from the Phoenix Suns in exchange for Marcus Thornton and a first round draft pick.  And I can assure you that no one saw it coming when he was taken by the Sacramento Kings with the final pick in 2011.  His ability to ignore doubters, remain focused and prepared, and absolutely crush it when he got the opportunity is glaringly reminiscent of Tom Brady.  As a Boston sports fan, that’s about the highest praise I can give an athlete.  I’m confident that Isaiah will become a legend in this city if he sticks around.