Jae Crowder took to Instagram after the Celtics’ big win over Brooklyn last night as he does after just about every game.  This time he posted a picture of himself screaming and grabbing his jersey alongside a picture of Kevin Garnett doing the same thing. 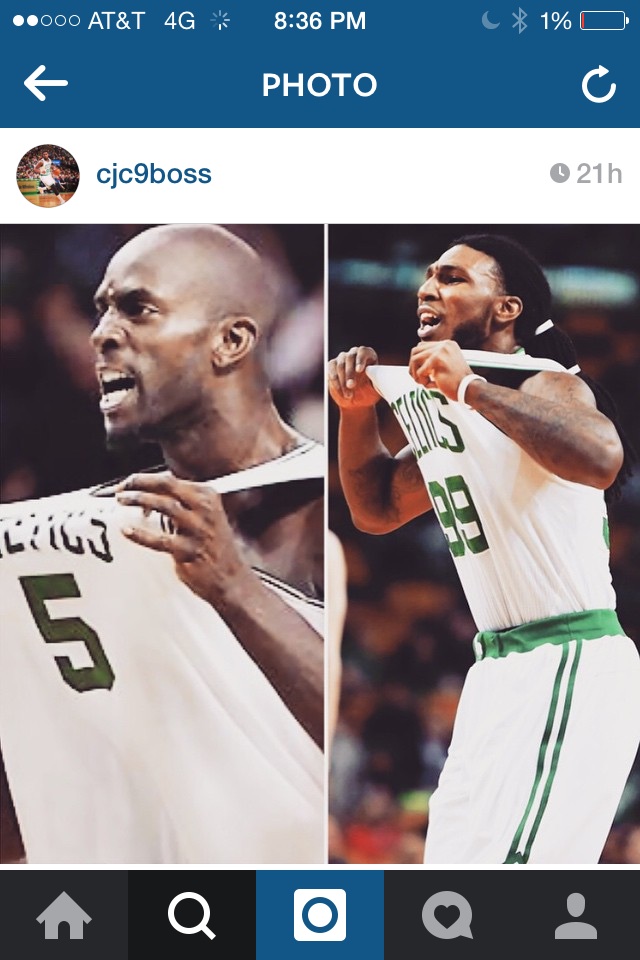 The caption read “‘THE PRESENCE OF PRIDE!’ PLAYING FOR SOMETHING BIGGER THAN YOURSELF!”

I absolutely love this KG reference from Crowder.  I’m not sure if he knows KG personally or if he’s ever even met him before, but he clearly understands what he meant to the Celtics’ franchise in the six years that he was with them.  I’m sure Bradley, Bass, and Sullinger still preach some of the lessons that they learned from him and this team has recently played with the type of grit and balls that Garnett has been known for his entire career.  The type of grit and balls that helped the Celtics to a championship victory, two Finals appearances, and an unexpected Eastern Conference Finals appearance in 2012 when everyone thought they were too old for another deep playoff run.  KG thrived on proving people wrong and that’s exactly what this current Celtics team is doing.  After Rondo and Green were traded and Sullinger was ruled out for the season, I don’t think anyone expected this team to be in the midst of a playoff race in late March but here they are.  Sure they’re not going to contend for a championship like KG’s Celtics teams did,  but their mindset appears to be the same.  Play your ass off every single night, no excuses.  If you can do that then good things will happen.  Lately it seems like this entire Celtics roster has been able to grasp this concept and it’s been a joy to watch.