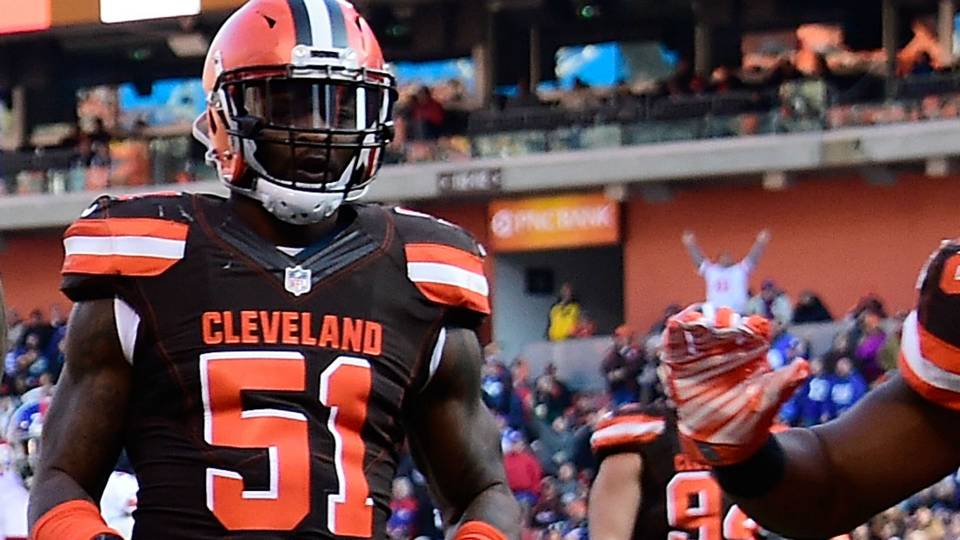 One day after the Cleveland Browns’ 12th loss of the season, and their fourth since acquiring Jamie Collins on Halloween, Collins took to Instagram to fire a relatively deliberate shot at his former team:

This isn’t the first time that the 2015 Pro Bowl linebacker has spoken out “indirectly” since being dealt to Cleveland for a third-round draft pick.  A couple days after the trade, he stated that “there is a more family feel to the Browns than the Patriots.  It’s different.”

Implying that you’re happier to be with a team that’s 0-12 as opposed to one that’s 9-2 shows a lack of competitiveness, and so has Collins’ play since he joined the Browns.  Here he is in last weekends loss to the Giants, refusing to make an effort to run Odell Beckham Jr. out of bounds before he reached the end zone:

@tomecurran @JumboHart If #51 for Cleveland is Jamie Collins this is the kind of effort that will get him that BIG $$$ #Sarcasm #PatsNation pic.twitter.com/Bs6Ples3AI

Collins also made a notably poor effort in a similar play against the Cowboys a few weeks ago in his first game with the Browns:

What his comments and these videos show us is that Jamie Collins is happier in Cleveland because giving a half-ass effort is more acceptable when you play on one of the worst teams in the history of football.  So if the Browns really are one big happy family while remaining winless through week 12, then he’s in the right place.  That means they care just as little about winning as he does.

If you need further proof that Collins doesn’t really care about winning or about football in general, just take a look at this interview with the Improper Bostonian back in early September:

Which would you rather watch: college football or pro?

Neither. I didn’t grow up watching football, and I still don’t. Me and Chandler Jones have talked about this since I first got up here. I never watched football. I never thought I’d be here, and I’d rather play video games. I don’t really want to watch it.

“I never thought I’d be here, and I’d rather play video games” is the line that really jumps out.  And it’s not at all surprising that he and Chandler Jones are the two most talented players that Bill Belichick has traded away in the last year.  Belichick lives and breathes football, and doesn’t want to waste his time with players who don’t take any interest in the game.  Not to mention it’s really strange for a professional athlete to not want to keep up with the other teams and players around the league.  It’s kind of part of their job.

Even as a kid, Collins never had any big aspirations to be an NFL player.  Apparently it just happened due to his freakish athletic abilities:

If I’d told you when you were a kid that you’d be a famous football player, what would you have said?

And if his remarks about being more content on an 0-12 team weren’t enough to convince you that winning isn’t a concern of his, this quote should do it:

How often do you wear your Super Bowl ring?

Never. When I first got it, I wore it a lot. I never wear it anymore. I’ve got it in a big ol’ safe. It kind of slips my mind.

So Jamie Collins never thought about football when he was growing up, and he thinks about it so little now that having the most prized possession in the world for a football player is something that rarely crosses his mind.  That’s a bit of a discouraging statement if you’re a head coach or even a teammate whose goal is to win football games.

And speaking of teammates, I guess Jamie didn’t have them in mind when he decided to post on Instagram and make comments about how much better the Browns’ “family” is.  He implied that his experience with his teammates in New England wasn’t particularly “family-like” without any regard for how they might feel about that statement.  Then again, I’m not sure he had much of a close friendship with anyone on the team based on his answer to who he hung out with off the field:

Player you hang out with the most off the field?

AD, Aaron Dobson. He and I hang out a lot, but I like my own time. I hang out alone a lot.

Shortly after this interview was conducted, Aaron Dobson was cut from the team.  Which I guess left Collins with no friends, which could also have had an impact on his attitude.

No one really knows for sure what the reasoning was behind the trade, but it was likely a combination of all of these factors.  In short, Bill Belichick doesn’t tolerate players who aren’t 100% invested in being the best they can be to help the Patriots win a Super Bowl.  Jamie Collins is continuing to show us that he doesn’t fit that mold.

The return was still disappointing.  I can assure you that no one is happy with getting a third-round pick for a Pro Bowl talent.  But if he was as passive as he seems from his comments and he wasn’t buying into the team’s championship-winning philosophy then I can understand why Bill wanted him gone as soon as possible.