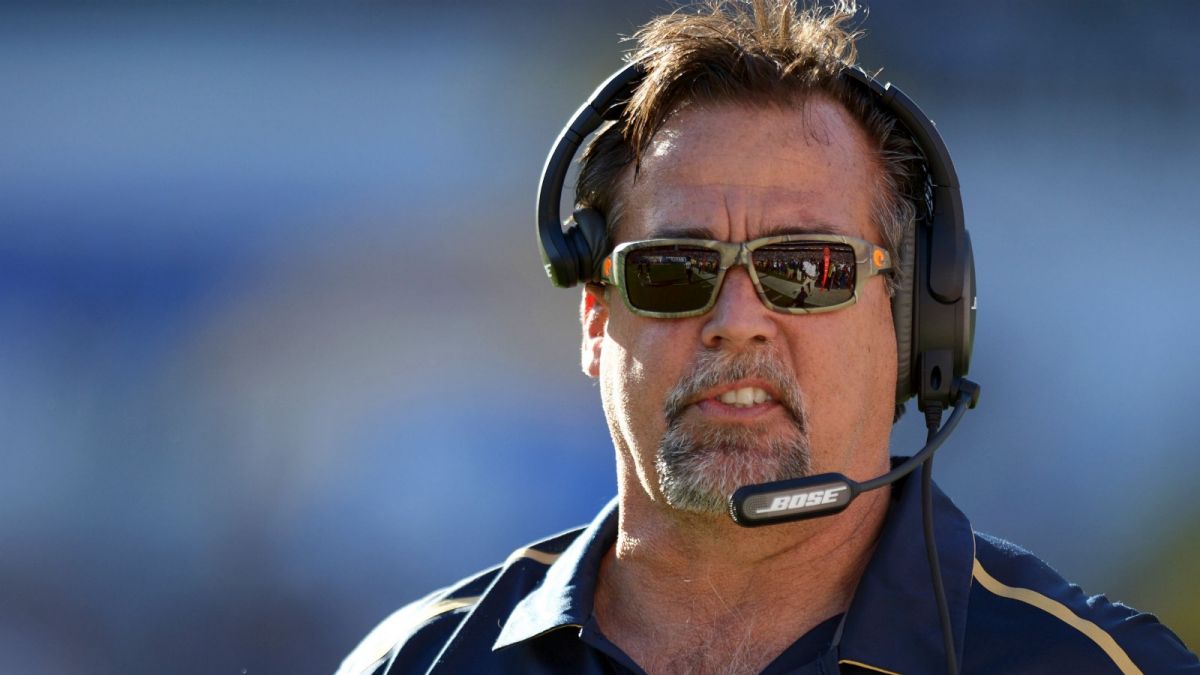 NFL head coach Jeff Fisher is aware that his Los Angeles Rams will face the New England Patriots this Sunday, but that seems to be all he knows so far about his upcoming match-up with one of the best teams in football.

When asked about the Pats’ running backs in an interview on Wednesday, Fisher first gave credit to LeGarrette Blount, who he signed to the Tennessee Titans as an undrafted free agent in 2010 before releasing him at final cuts:

“I have a place in my heart for LeGarrette, because I gave him a start, and I have great respect for him. He’s a big back, and he’s hard to get down. And as they rotate through, different guys play in different situations, and they do a good job with it. He knows where the ball’s going to go, and the guys are very, very disciplined.”

As he went more in-depth about those “different guys” he was referring to, it was revealed that he actually has no clue who the Patriots’ other two running backs are:

“I’ve been impressed with Brandon and what he’s done out of the backfield. You’ve got to deal with him, in addition to Danny. You’ve got playmakers all around, so we have to play sound defense.”

I have absolutely no idea who Fisher is referring to.  Maybe Brandon Bolden, but he hasn’t caught a pass or ran for a yard in the last eight weeks.  The only Danny on the team is Danny Amendola, who isn’t a running back.  Or he could just be completely unaware that Danny Woodhead hasn’t been a Patriot since 2012.

Either way, all of this is why Jeff Fisher is well on his way to owning the record for the most losses by a head coach in the history of the NFL.  It’s also why the Patriots have outscored his teams a combined 104-7 in their last two match-ups and why they’re likely to put up 50+ points on the 4-7 Rams at Gillette Sunday afternoon, dropping Fisher to 2-8 in his career against Bill Belichick.

In his 21 full seasons as an NFL head coach, Fisher’s teams have finished over .500 just six times.  It’s actually a miracle that he’s managed to have a head coaching job for this long.  As Martellus Bennett said when talking about Fisher this past summer, “if a QB went 7-9, he’d never be able to find a job.”

How Jeff Fisher manages to go 7-9 every year without getting fired is beyond me.  It probably has something to do with his history of “cozying up to the league”, which is another reason Belichick dislikes him and continues to show no mercy when facing his teams.  Either that or some teams enjoy having a leader who does nothing but put on a pair of shades and act like a tough guy on the sidelines.  Meanwhile he’s getting ready to play the 9-2 Pats on their home turf without any knowledge that Dion Lewis and James White even exist.  Kick-off is a few days away, but this one already looks like a blowout.