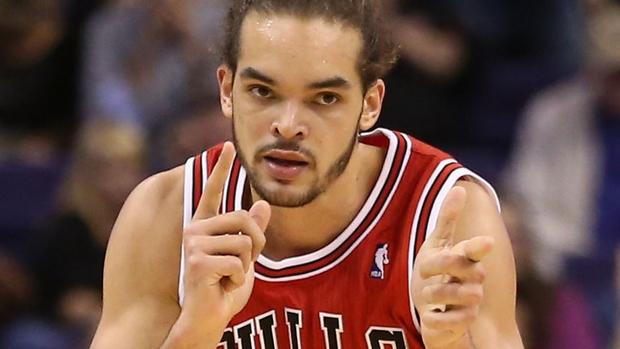 Joakim Noah was seen jawing at LeBron James in last night’s Cavs-Bulls game in an episode that included a close-up of Noah clearly calling LeBron a pussy.

I’ve been a big fan of Noah ever since he was at Florida and obviously anyone who wants to stand up to LeBron and call him a pussy is a winner in my book.  I’m sure there are many players that would love to say that to Bron Bron but wouldn’t have the balls, but Noah always speaks his mind.  He has that KG-like intensity that just gets you fired up every time you watch him play.  It’s probably the reason that him and KG always hated each other.  There’s just no way that two players with that level of intensity can get along.

Also, you can’t see it in the clip but before Noah started yelling at LeBron, the ref was trying to grab the ball out of LeBron’s hands only to have Bron Bron rip it away from him like a child who doesn’t want to share his toy.  If anyone else in the NBA did that it would be a delay of game penalty and a technical foul, but of course nothing happened.