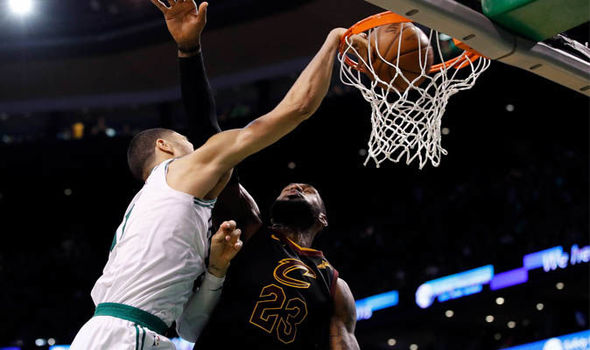 LeBron James has been to eight straight NBA Finals.  Never was that streak in jeopardy more than last month when he faced the Celtics in the Eastern Conference Finals.

Without their two best players, the C’s young guns were just a few made shots away from dethroning the King.  They didn’t, but they put the league on notice.  When they get Gordon Hayward and Kyrie Irving back next season, they’ll be well equipped to end LeBron’s reign.

Unless, of course, he decides to join the organization that’s given him more trouble than any other in the East over the course of his 15-year career.

It would be illogical to say that the Celtics couldn’t use one of the greatest players of all-time.  But do they need him?  No.  They just came within a game of being the second youngest team to ever make the NBA Finals.  They have one of the best young duos in basketball with 21 year-old Jaylen Brown and 20 year-old Jayson Tatum.

Considering those factors, does LeBron need the Celtics?

If he wants to match Kobe or Jordan’s ring totals, it’s his best option (aside from the Warriors, but I’d like to think he’s a little more competitive than that).  Boston is built for long-term success for a stretch that could extend beyond LeBron’s career.  There’s no better place for him to build one more dynasty before he hangs it up.

How much he would benefit the Celtics in the long run would depend on what they’d have to give up and how long he would stay for.  If they sacrifice their future for one championship then it isn’t worth it.  There’s a good chance that Kyrie would be out the door, and at 26 years old he might be more valuable than LeBron if you’re looking to compete for titles beyond the next three or four years.

This whole thing is long shot.  It feels a little like the Kevin Durant rumors from a couple years, except the Celtics aren’t facing desperation the way they were back then.  They’re already in position to win right now.

Not to mention, LeBron has been a villain in Boston for about the last decade.  No, we wouldn’t complain if he came here.  But ending his Finals streak does sound a little more fun than helping him extend it.  Come here if you want, Bron Bron.  We’ll be fine either way.