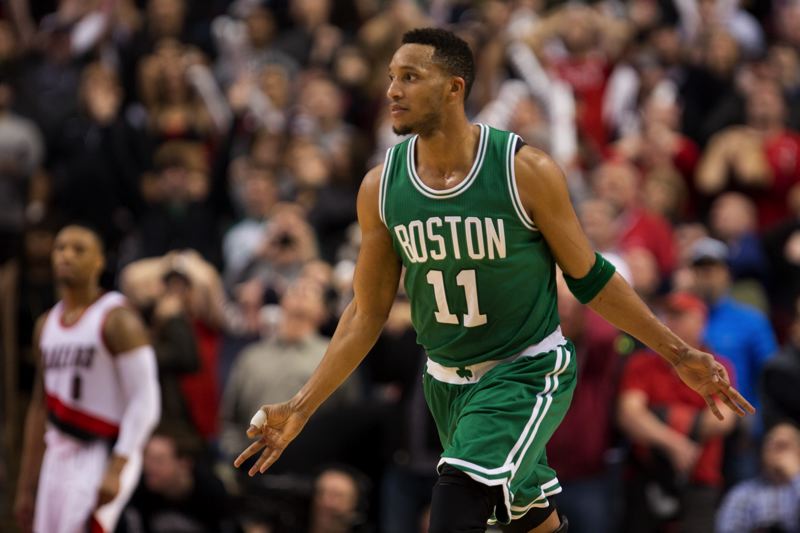 Evan Turner reportedly agreed to a 4-year, $70 million contract with the Portland Trail Blazers on Friday.  Two years ago he couldn’t have dreamed of such a big payday, but his time with the Celtics has changed the way he’s perceived around the league.

After being selected second overall by the Sixers in the 2010 NBA Draft, the first four years of Evan Turner’s career were a disappointment.

He spent three and a half seasons in Philadelphia and only shot over 42% for one of them.  54 games into the 2013-14 season, the Sixers sent ET and Lavoy Allen to the Indiana Pacers in exchange for Danny Granger.

The Pacers were locked in a playoff race as the second best team in the East behind the Miami Heat and they were hoping that Turner would provide them with some more scoring off the bench.  They were wrong.

In his 27 games with the Pacers, Evan Turner showed that he just might not be cut out for the NBA.  He played 21 minutes a game and averaged 7.1 points on 41% shooting.

In July of 2014, Danny Ainge decided to give ET a chance to redeem himself and revive his once-promising career by signing him to a two-year, $6.7 million deal.  With the help of Brad Stevens, the 25 year-old got right to work and did just that.

In 2014-15 Turner was able to adjust his game and become more of a facilitator, averaging a career-high 5.5 assists and finding his niche with the Celtics’ first playoff team in two years.

This past year was the best of ET’s career.  Coming off the bench for the C’s, he shot a career-high 45.6% from the field and a career-high 82.7% from the free-throw line, averaging 10.5 points and 4.4 assists per game.  When all was said and done, he was in the conversation for Sixth Man of the Year and had helped to lead the Celtics to their first winning record since 2011-12.

Evan Turner was the definition of a pleasant surprise for Boston.  At times he was hard to watch.  Especially when he would go into “Evan Turnover” mode and start firing passes off people’s feet or into the fifth row of stands.  But for the most part he was effective.  He was arguably the Celtics’ best clutch shooter over the last couple years, and he has one of the best spin moves I’ve ever seen when it’s under control.

For someone who was only in Boston for two seasons, he sure gave us a lot of memorable moments.  Here’s the best of Evan Turner’s Celtics tenure:

In a match-up with the Bulls at the Garden last December ET decided to get fancy on the fast-break, pulling off a 360 dunk in the second quarter of a tie game:

After the Celtics traded away Rajon Rondo in December of 2014 and Jeff Green a few weeks later, they were desperately searching for an identity.  In the month or so before Isaiah Thomas came aboard, Turner was huge.  If it weren’t for him, the season probably would have been a lost cause by the time IT arrived, but he was able to keep them above water in the meantime.  First there was this game-winning three in January of 2015 in Portland to give the Celtics a much-needed victory right as their season was about to start slipping away:

The Celtics started the 2014-15 season 16-30 before going 24-12 in their last 36 games.  Most people think that the turnaround began when Isaiah Thomas was acquired during the All-Star break, but it actually started a few games before.  The C’s won four out of five leading up to the break to improve to 20-31 before the big deal was made.  The last game before All-Star weekend was this one, where the Celtics beat the best team in the Eastern Conference with another buzzer beater from ET:

The most I’ve ever seen Turner take over a game was this 30-point performance in a win against the Magic in the midst of the 2015 playoff push.  I actually had the privilege of attending this one, and watching him hit clutch shot after clutch shot in the fourth quarter was reminiscent of the Paul Pierce days:

In the Celtics’ two biggest wins of the 2015-16 season, ET was right in the middle of the action.

First there was the win in Cleveland in February when Avery Bradley buried the Cavs with a three at the final buzzer, where Turner put up 19 points, 12 rebounds, and 6 assists:

Then there was that time on April 1st when the C’s ended the Warriors’ 54-game home winning streak.  ET shot 8-13 from the field, contributing 21 points, 5 assists, and 5 rebounds:

Evan also brought us a positive attitude and some pretty hilarious post-game interviews.  All-in-all he was great for the team and the city of Boston, and we wish him the best in Portland.