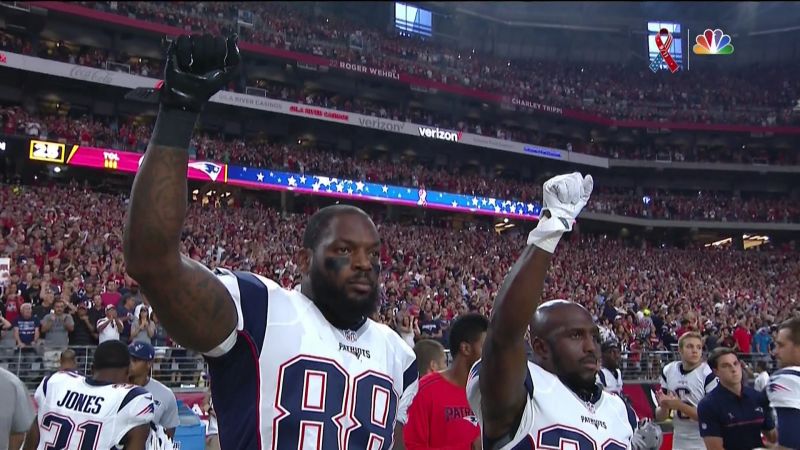 “After the New England Patriots completed their historic 34-28 comeback win over the Atlanta Falcons in Super Bowl LI, Patriots tight end Martellus Bennett told reporters he would skip the team’s ceremonial visit to the White House now that it’s occupied by President Donald Trump. It appears he won’t be alone.

On Monday, Patriots defensive back Devin McCourty told TIME he, too, will skip the congratulatory trip. “I’m not going to the White House,” McCourty wrote in a text message to TIME from the team bus. “Basic reason for me is I don’t feel accepted in the White House. With the president having so many strong opinions and prejudices I believe certain people might feel accepted there while others won’t.”

McCourty said he believed attending the event is a personal choice and “I can’t imagine a way I go there.”

Bennett and McCourty would not be the first pro athletes to sit out the presidential photo-op. But their decision has taken on particular resonance because of the very public ties between Trump, Patriots owner Robert Kraft, coach Bill Belichick and quarterback Tom Brady. Although they are three people most responsible for the current Patriots dynasty, Bennett said after the Super Bowl that he is not worried about potential backlash from the team.” – TIME

Martellus Bennett & Devin McCourty are the first athletes to decline an invitation to the White House under Trump’s presidency and I can guarantee that they certainly won’t be the last.

This is a difficult one for me because on one hand I feel like they should go since this has nothing to do with Trump, more so recognizing what this team has accomplished.  It’s not as though when they get there that they must declare their loyalty to President Trump and each talk individually about how great he is.

But on the other hand it’s not hard to imagine how they must feel about President Trump.  They are hard working, decent American citizens and are entitled to whatever opinion they like.  McCourty & Bennett are both big supporters of Colin Kaepernick’s movement and before the opener against Arizona, they were filmed raising their right hand in the air whilst the national anthem was being sung.

Like I said, Bennett & D-Mac wont be the last.  LeBron James refused to stay in a Trump hotel when the Cavaliers visited New York so I imagine he would do the same to the White House if the opportunity arises.  The Mavericks, Bucks, and Grizzlies have all said that they will not be staying at Trump hotels and will be looking elsewhere.

This isn’t the first time that an athlete has declined an invitation to the White House.  Baltimore Ravens C Matt Birk was not present at the White House in 2013 after the Ravens won the Superbowl.  Barack Obama is a supporter of Planned Parenthood and Birk is Catholic.  The reasoning behind this is entirely religious but the same rule still applies.  If I’d known about this then I’d be saying the same thing I am now.

It’s sometimes easy to forget that professional athletes are human beings.  The platform that they have and the effect they have on people’s lives can be massive, whether that is for good or for bad.  In an ideal world, I would love to have seen McCourty and Bennett both go and discuss with Donald Trump exactly how they feel and why they feel that way.  But that’s not my decision to make or anyone else’s but theirs.  The two of them must feel like they would be talking to a brick wall if they were to question Trump on this subject.

A lot of people may like this decision, the same amount may despise it.  But I hope the majority of people respect it.  They aren’t trying to stir the pot or looking for a fight, they are simply making a stand and I hope everyone understands that.