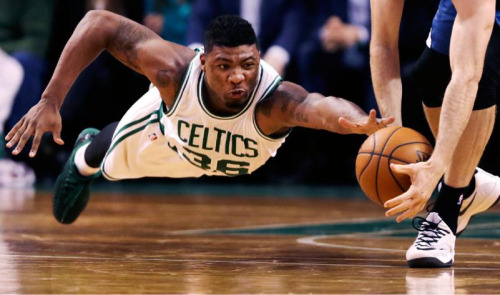 The fact that the Celtics shot 35% and still only lost by eight points to the Spurs on Sunday is encouraging.  After the game, Jared Sullinger told the Boston Globe’s Adam Himmelsbach how games like these show how much this team has steadily improved the last couple years under Brad Stevens:

Sullinger is absolutely right that two years ago, or even a year ago at this time, the Celtics would have been run out of the building if they couldn’t hit shots against a title contending team like San Antonio.

Of course that’s a credit to their effort on the defensive floor, which starts with the walking Tommy Point himself, Marcus Smart.  The kid is an absolute lunatic on the court, and I mean that in the best way possible.

Plays like this all-out diving steal that puts 2010 playoff Rondo to shame are a perfect example why:

And despite the questionable shot selection, this three while falling out of bounds against the Raptors on Friday was also quite impressive:

Photo via Dunk Of Death