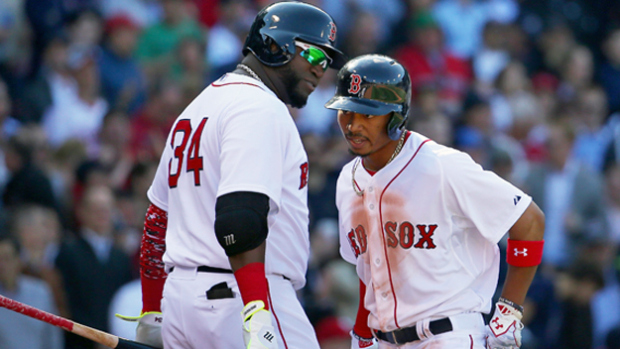 Mookie Betts hit a homerun, robbed a homerun, and stole two bases on one play in today’s 9-4 opening day win against the Nationals.  The Mookie Show started in the first inning when Bryce Harper sent the first pitch he saw into deep right center field and watched Betts leap above the bullpen wall and rob him of a dinger.  If I could rob any baseball player of a home run I would probably choose Bryce Harper so that makes this great catch even more spectacular.

Mookie’s next highlight reel play came in the bottom of the first.  He led off with a five-pitch walk, and then took off for second on a 1-0 pitch to David Ortiz.  As he slid into second, he realized there was no one covering third so he decided he’d grab an extra base.  He slid into third base safely after winning a footrace against Ian Desmond and Yunel Escobar.  A heads up play that we’ve seen before as the last player to do it was Dustin Pedroia last year.  In total, though, there have only been 11 instances in MLB history in which a player has stolen two bases on the same pitch.

To top it off, Betts sent an inside fastball from Jordan Zimmermann over the monster for a three-run homer.  A pitch that, as Rick Porcello pointed out, is nearly impossible to turn on and make solid contact.

He also had an RBI single as he continues to meet his high preseason expectations.  I think it’s safe to say this kid is an absolute stud.  We saw flashes of it last year but he’s proving now that he’s ready to be a star in this league.