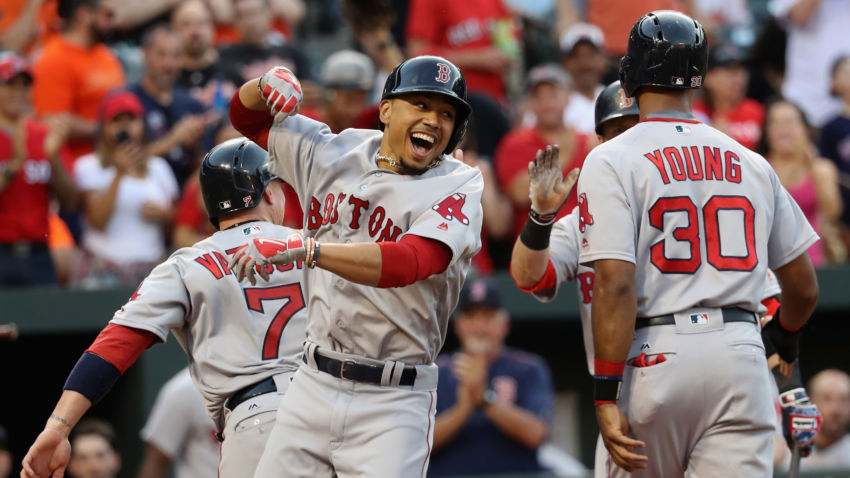 Minus that three-game losing streak last week, the Red Sox’ offense has managed to stay scorching hot for the better part of 2016.  As of late their starting pitching has been consistently solid as well.

Both remained true on Tuesday night with their 6-2 win over the Orioles.  Eduardo Rodriguez looked great in his first start of the year after rehabbing in Pawtucket, allowing just two runs in six innings of work.

Xander Bogaerts was just 1-for-5 but extended his hitting streak to 24 games.  He and Jackie Bradley Jr. own the two longest hitting streaks in Major League Baseball this year.  Xander’s is the longest by a shortstop since Derek Jeter in 2006.  He currently leads the AL in hits (76) and average (.350).

The star of the show Tuesday was Mookie Betts.  Mookie made history when he became the first Red Sox lead-off hitter in team history to hit a home run in the first and second inning of the same game.

As if that weren’t enough, he added a third dinger in the seventh with a solo shot.  Mookie used all parts of the field, hitting his three home runs to left, center, and right:

Mookie also made an impact with his glove when he came out of nowhere to make this highlight reel catch:

The Red Sox will play the third game of their four game series against the O’s Wednesday night at Camden Yards.  They lead the series 2-0 and lead Baltimore by three games in the AL East.