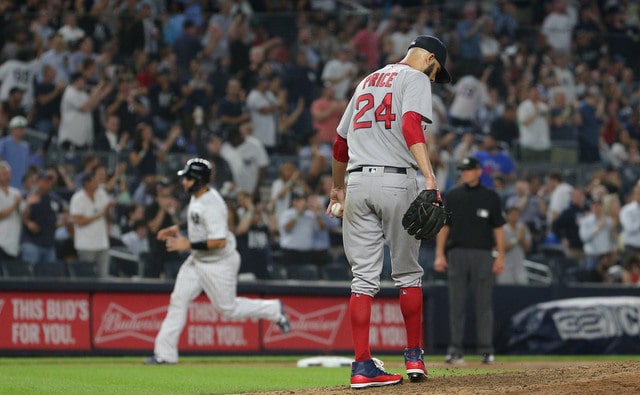 Before Wednesday, it had been 80 days since David Price’s last bad outing.  That unforgettable night at Yankee Stadium on July 1st when he allowed five homers in 3.1 innings and strengthened the argument that he can’t pitch in big games.

When you play for the Red Sox, “big games” include any game against the Yankees.  If it happens to be in New York, the level of difficulty increases.  That loss in early July dropped Price to 2-4 with a 7.82 ERA in eight starts against the arch-rival since joining the Sox in 2016.

After arguably the worst showing of his career, the $217 million “ace” proceeded to go 6-0 with a 2.22 ERA over his next 11 starts.  The Sox went 10-1 in those games.  There was hope.  Maybe he can ride this momentum into October and finally be a catalyst for a deep playoff run.

Then he found himself in the Bronx again.  The Yankees beat up on the Sox 10-1 on Wednesday night, thanks in no small part to Price giving up three home runs in 5.1 innings.  He’s now allowed 13 homers in his last four appearances at Yankee Stadium.

Let me say that again in case it didn’t process the first time.  THIRTEEN HOMERS IN FOUR STARTS.  The Yanks are hitting .378 against him over that span and his ERA is 10.80.

If this guy can’t handle the regular season pressure that comes with the Red Sox-Yankees rivalry, then he definitely can’t deal with any sort of postseason pressure.  What I’m saying is don’t let all of the dominant performances against bad teams deceive you.  This is the same David Price that has never won a start in the playoffs.