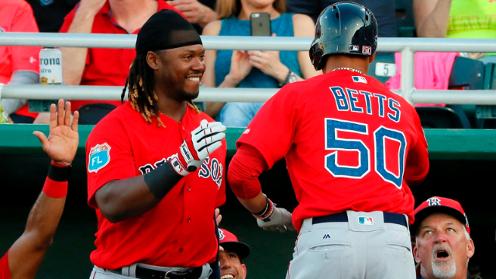 Boston.com recently rounded up a bunch of predictions from major media outlets regarding the Red Sox’ upcoming season.

Yahoo Sports pinned the Sox as the fifth best team in Major League Baseball.  I’d say that’s about as optimistic as you can be after the disasters that took place in 2014 and 2015.

CBS Sports doesn’t think quite as highly of this 2016 team.  They predicted that Boston would only be the 12th best, saying “There’s an awful lot of talent here, but we could have said that last season.”

SI.com was fairly positive, picking the Sox to be the 8th best team.  Fox Sports, on the other hand, thinks there are 18 teams that are better.  In other words, the Red Sox suck and we should get ready for them to miss the playoffs for the sixth time in seven years.

As you can see the predictions were all over the place and that should surprise no one.  If we’re being completely honest, I also have no idea how the Sox will fare this year.  Do they have the talent to win the division and go deep in the playoffs?  Yes, I believe they do.  Have they disappointed us five of the last six years by drastically underachieving?  Absolutely.

The Sox have added some key pieces in the offseason and look poised to make major improvements and return to the playoffs.  The only problem is that we’ve said that before and things didn’t work out.  It’s happened so often recently that it’s hard to get too excited about this team.  They’re in a position where the fans need to see results before they decide to buy in.

PS: I don’t want it to go unmentioned that I am extremely grateful for the 2013 World Series and the joy that team brought to my life will not be forgotten among the dumpster fire that has taken place over the majority of the last five years plus.