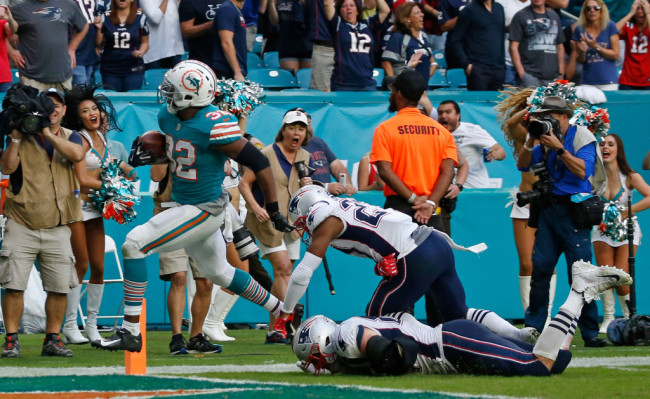 There’s really not much to say about this one.  The defense sucked.  When you put up 33 points on the road that should be enough for a win and the game shouldn’t come down to the last play.  But it did, and despite their poor effort the D still had a chance to close out a win with seven seconds remaining and a 33-28 lead.

Then Bill Belichick decided to replace Devin McCourty with Rob Gronkowski.  As Gronk stated in his post game interview, the only time he lines up on defense during practice is when he’s defending a Hail Mary.  Belichick’s assumption that Ryan Tannehill was going to launch the ball 70 yards to the end zone displayed a level of ineptitude that we’ve never seen from him.

It was the worst ending to a regular season game during Belichick’s 18-year tenure, and also one of the first times he’s ever admitted to a specific mistake:

“It starts with me,” Belichick said about the final play. “We have to play better situational football. We’ll work to try to achieve that.”

That being said, there was a clear lack of effort from just about everyone on the defense.  If you’ve watched the play multiple times like I have then you know what I’m talking about.

A play that was avoidable on so many different levels could end up costing the Patriots their season.  With the Chiefs comeback win over the Ravens in overtime, the goal of home field advantage throughout the playoffs is likely out the window.  As impressive as Brady’s playoff numbers are, in the rare case that he’s had to go on the road the Pats are 3-4 and he’s thrown eight picks.  They’re capable of winning at Arrowhead, but it certainly makes things more difficult.

Now is a good time to remind ourselves that most teams would be happy with a 9-4 record, and the fact that we’re already putting ourselves in the AFC Championship shows just how spoiled we are.  On to Pittsburgh.