Spring Training is underway in Fort Myers and our two disaster signings who made their Red Sox debuts in 2015 are as fat and lazy as ever.

This picture of Pablo Sandoval and his gut has been making its rounds on the internet, and rightfully so: 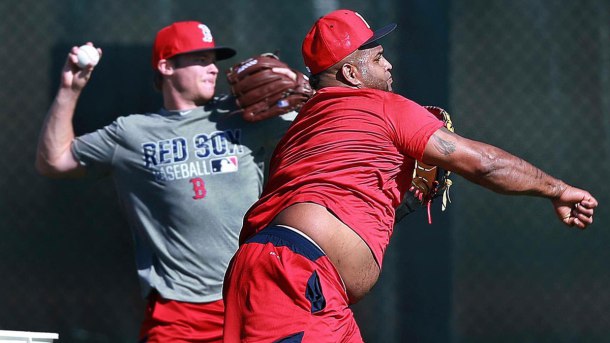 I understand that Pablo has probably been fat for a very long time and will probably always be fat, but at least give us some effort.  At least show us that you’re interested in making improvements on an abysmal season last year.  Your defense was terrible.  You weren’t quick enough to play third base.  Your number one mission in the off-season should have been to get into better shape and you came back looking like you’re nine months pregnant.  Way to go, Panda.

To make matters worse, Red Sox management is feeding us bullshit lies to make us believe that everything is great.  Just like they did last Spring when they tried to convince us that we had five number one starters.  When asked about Sandoval’s physical condition, John Farrell acted like he was satisfied:

“I just saw him briefly this morning, but I can tell you that seeing him in January and spending a couple of days with him, we feel like he is in better condition than he finished the year in last year, so we feel like it will allow his range to be improved at third base, which is needed” Farrell said.

Perhaps this is Farrell’s way of justifying the fact that the Red Sox were not nearly strict enough when setting the guidelines for Sandoval’s off-season conditioning:

“We outlined he needed to come back in better condition, and along with that, you anticipate there’s the potential for weight to be dropped,” he said. “But there wasn’t a specific number given that said, ‘Hey, we want you to come in at this weight.'”

Now I understand that Pablo Sandoval is a grown man who should be able to recognize when he needs to lose weight, but if you look at his history you’ll see that he clearly needs some guidance.  One of the reasons he left San Francisco in the first place was because there was a weight clause in his contract.  The Red Sox, however, have allowed the man to eat whatever the hell he wants:

“Sandoval said last year that one of the reasons why he left San Francisco was that the Giants insisted that he remain on a weight regimen, which he said wouldn’t allow him to “be myself.” There is no weight clause in his Red Sox contract.”

“Be myself” can definitely be translated to “stuff my face whenever I feel like it.”  This guy has the Red Sox wrapped around his finger.  Pay me 17 million a year to get fat and hit .240 and don’t make me lose weight?  Sounds like quite a gig.

As for Hanley, he’s having a great time soaking up the Florida sun and casually learning how to play a new position.  He showed up without a first basemen’s mitt, but it’s fine because he borrowed Mike Napoli’s and his will be arriving in the mail soon.

Then Mike Giardi uploaded this video of Ramirez in the field:

It’s hard to tell but it definitely seems like that ball that sailed by him to the left was catchable if he made an effort.  Maybe I’m just reaching for things to complain about now, but unfortunately this is what we have come to expect.

I don’t think there’s anyone who thinks the Hanley experiment at first base is going to work.  If it does, we’ll all be pleasantly surprised.  The guy was hard to watch in the outfield last year and we all know his attitude sucks.

The good thing with Hanley is that if he hits (and I mean really hits) then the fielding won’t be as much of an issue.  But the harsh reality with both Ramirez and Sandoval is that they’re being grossly overpaid considering how little they seem to care about getting better and winning.  Furthermore, no one within the organization seems to be interested in showing them discipline.

I fully expect the Red Sox to improve this season but I also expect that these two clowns will continue to disappoint us, and there’s no one to blame besides management.