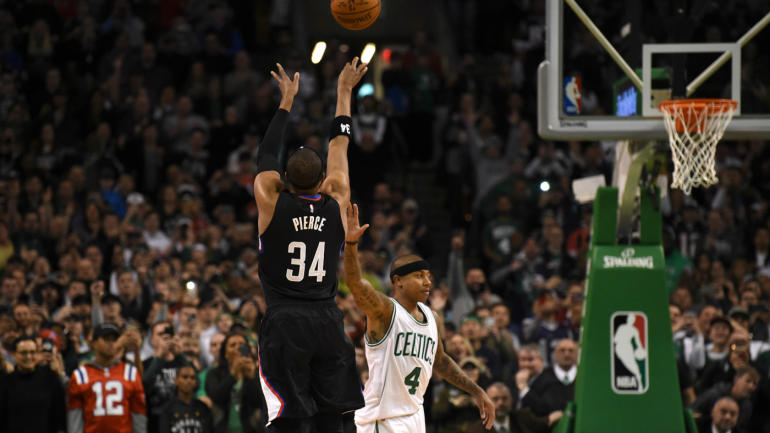 After IT was scratched from the Cavaliers’ lineup at the Garden on Wednesday, his scheduled tribute video was pushed back to Cleveland’s next trip to Boston on February 11th.  That also happens to be Paul Pierce’s jersey retirement night.

Isaiah doesn’t see a problem with that, but Pierce made it clear that he does:

“I’m not saying Isaiah shouldn’t get a tribute video. … But on February 11, the night I get my jersey retired, I’m not sure I want to look up at the Jumbotron and see Isaiah highlights,” Pierce said on ESPN’s “The Jump.”

I’m not blaming IT.  I honestly don’t think he fully understands what Paul Pierce meant to Boston.  Otherwise he would understand that he isn’t worthy of receiving a tribute video on Pierce’s night.  He thought it wasn’t a big deal, but to Pierce and anyone who was a fan of the Celtics from 1998-2013, it is.

Isaiah wanted to eventually be considered among the all-time Celtic greats.  The trade back in August cut that dream short.  That’s understandably been a tough pill to swallow for the 5’9″ point guard who came to Boston as a spark plug off the bench and left as a superstar averaging 30 points per game.  He got a taste of what it means to be an important sports figure in the greatest sports city in the world, but he has no idea what it means to be spend a decade and a half with the C’s, experience all of the highs and lows, and eventually walk away with a ring.  With all due respect, The Truth has done more than enough to earn a night all to himself.  The Isaiah tribute can wait a little longer.