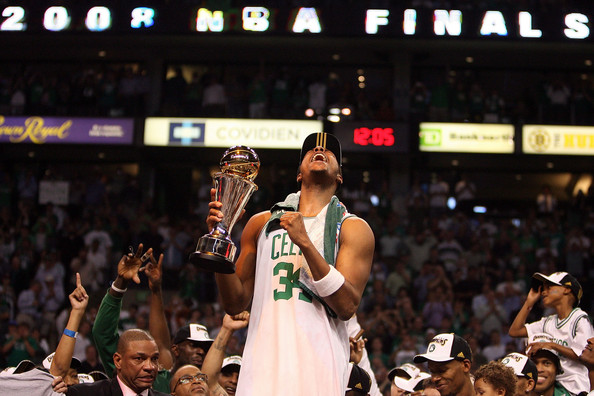 During an interview with SiriusXM NBA Radio on Wednesday, Paul Pierce said the following:

“I think I’ll always be remembered as a Celtic. I had all my glory days, all my prime was pretty much as a Boston Celtic. I think I owe the fans and I owe myself that much, just to be able to put that uniform on one more time and go out that way, say I retired a Boston Celtic.”

Now obviously nothing has been confirmed yet so I don’t want to get ahead of myself but my god I just want this to happen so bad.  He announced last month that he would retire at the end of this season with the Los Angeles Clippers but this interview totally changes the game.  One of the all-time greats to put on the green and white jersey could finally be coming home and I don’t even care that it is for a day.  The fact that this man, the man who entertained us for 15 years could retire as a Celtic, well, that just makes me smile.

Selected in the 1998 draft as the 10th overall pick, Pierce rose through the ranks and was a starter every single year he was in Boston.  He is a 10x All-Star (all with the Celtics) and joins Larry Bird & John Havlicek as the only three players in Celtics history to score 20,000 points.  He’s made the most three-pointers as a Celtic and has played the third most games. His only ring came in 2008 when he was also named MVP in the finals but that one ring was good enough to cement his place into the history of a team that has already had plenty of banners.

His career isn’t over yet and I would love to see him actually play for the Celtics one more time.  But just in case we don’t, here’s a look at what ‘The Truth’ did for the city of Boston in 2008.