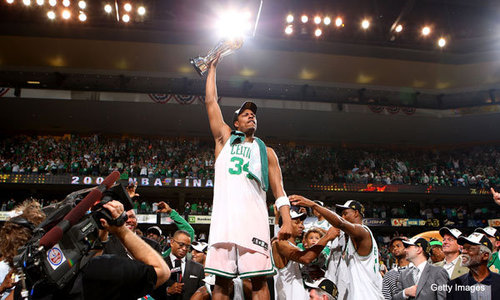 Pierce, who was traded from Boston to the Brooklyn Nets four years ago, will be recognized by the Garden faithful for his 15 years of dedication that he gave to the Celtics organization.  Expect emotions to be running high and for C’s fans to give one of the all-time greats the send-off he deserves.

The Truth gave us countless memorable moments both at home and on the road.  But in honor of him stepping out onto the parquet one last time, I decided to compile a list of his top 10 moments at TD Garden (formerly the Fleet Center and TD Banknorth Garden):

With the Celtics trailing the Lakers by three at the start of the 3rd quarter in Game 1 of the 2008 NBA Finals, Pierce drew contact from Vladimir Radmanovic and banked in a three to tie the game.  He buried the free-throw to take the lead and the C’s went on to win 98-88 and go up 1-0 in the series.

In the final seconds of overtime in an early-season game against the Bucks in 2010, Pierce went to the free-throw line to not only extend the Celtics lead, but to score his 20,000th career point.  He buried the first one, and the Garden erupted as he lifted his hands in the air and nodded his head.  He then calmly sank the second to make it a two-possession game and seal the win:

Pierce was the third Celtic to join the 20,000-point club after John Havlicek and Larry Bird, and eventually passed Bird for second on the Celtics’ all-time scoring list in 2012 when he hit a third quarter three against the Charlotte Bobcats.  He of course received a standing ovation, and his mom and his wife were in the building too:

With Kevin Garnett sidelined, the Celtics and the Bulls gave us the greatest first round playoff series in NBA history, and the 14th greatest series overall according to a list made by Complex.

The shining moment for Paul Pierce came in Game 5, when he buried a game-winner at the end of OT to give the C’s a 3-2 lead in the series.  The Truth hit a lot of game-winning shots, but this was arguably his biggest at the Garden:

Fans outside of Boston call Pierce soft for this one, but Celtics fans just remember the excitement they felt when they saw 34 hopping back out of the tunnel after we thought he was done for good.

Midway through the third quarter in Game 1 of the 2008 NBA Finals, Pierce went down clutching his right knee.  He was carried off the court and wheeled to the locker room in a wheelchair, only to return minutes later and drain back-to-back threes to give the Celtics a four-point lead:

Game 3 of the 2002 Eastern Conference Finals still stands as the greatest comeback in NBA playoff history.  With the Celtics trailing the New Jersey Nets by 26 points in the third quarter, Paul Pierce proved himself as one of the NBA’s elite players by scoring 19 of his 28 points in the fourth and leading the C’s to a 94-90 win:

This moment was the christening of the new Garden (then the Fleet Center) and gave the C’s a 2-1 lead in the series.  They eventually fell short, but this series brought back the Celtics Pride that had gone missing in the 90’s.

In one of the great one-on-one match-ups in NBA history, Pierce battled LeBron for a trip to the Eastern Conference Finals in 2008.  In Game 7, the two went back-and-forth, neither one giving an inch.  LeBron would finish with 45 and Pierce with 41, but the Celtics outlasted the Cavs 97-92:

My second favorite Paul Pierce shot after the 2012 three over LeBron in Miami.  In a vintage Pierce moment, he talks so much trash to Al Harrington that the ref has to come over and tell him to shut up.  Pierce simply keeps his eyes fixed on Harrington, dribbles right up into his face and buries a three.

My favorite moment I’ve ever been a part of at TD Garden.  Six months after Pierce and KG were dealt to the Brooklyn Nets, they made their first return back to Boston.  It resulted in one of the most emotional moments in the building’s history:

I love KG for everything he did to turn the Celtics into a championship team (that Allen guy was okay too), but this was a moment for Paul Pierce to share with all the Boston fans who stuck with him through 10 years up to that point.  There were some good seasons and some historically bad ones, but The Truth didn’t leave and the fans stayed by his side.  The end result was that he got to raise the Finals MVP trophy at home on the parquet as the city of Boston and much of the world looked on:

This was a no-brainer.  Everything that Paul Pierce went through in Boston was for this one moment.  Watching him raise up the Celtics’ 17th championship banner as his eyes welled up with tears was an extremely proud moment for everyone who followed this guy from the time he was drafted in 1998.

After years of questions as to whether or not he had what it takes to be a winner in Boston, he finally earned the opportunity to add his name among the all-time greats:

Pierce’s last game in Boston on Sunday is sure to be another unforgettable moment to this list.  Knowing the kind of guy that Doc Rivers is, he’ll probably let Pierce enter the game and give the fans a chance to show their appreciation one last time before this Celtics icon rides off into the sunset.  There won’t be very many dry eyes in the building.