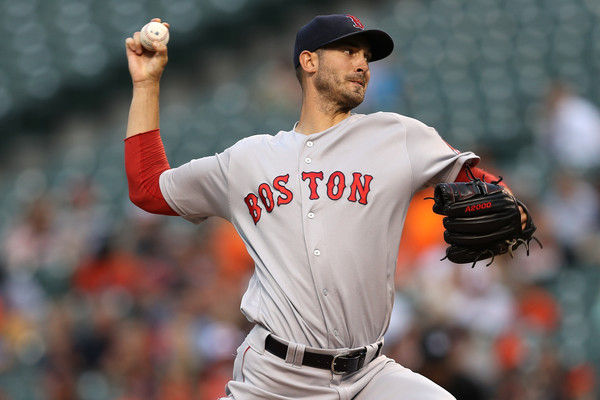 With a 7-2 record and a 3.68 ERA, Rick Porcello has been a pleasant surprise for the Red Sox’ starting rotation in 2016.  But after his rough 2015, there have been questions as to whether or not he would be able to sustain the success he’s had through the first two months of the season.

Unfortunately those questions are beginning to hold some water because he’s had a couple shaky outings as of late.  Most recent was Thursday night’s loss to the Orioles in which he gave up five earned runs in six innings.

The final score was 12-7 as Boston’s offense put on another solid display of hitting, but were let down by their pitchers’ inabilities to get batters out.  The same thing happened Wednesday night in their 13-9 loss.  After outscoring the Orioles 13-4 in the first two games of their four game series, the Sox have now allowed 25 runs in two nights.

Wednesday night it was Joe Kelly allowing seven earned runs in two and a third.  Tommy Layne then came in and promptly surrendered two hits and a run in two thirds of an inning.

Clay Buchholz, who got lit up one too many times as a starter and was recently demoted to the bullpen, looked solid in his first relief appearance on Tuesday.  On Wednesday he went back to being Clay Buchholz by giving up three earned runs in three and a third.

Immediately after the game, Joe Kelly also received a demotion when he was sent down to Pawtucket.

I appreciate the fact that the Red Sox are putting their foot down this season and not giving guys too long of a leash when they continue to turn out terrible performances.  That’s certainly an improvement over recent years, but the problem now is that they’re running out of options.

Steven Wright has been incredible so far, but it’s hard to count on a knuckleballer to produce the way he’s produced for an entire season.  And despite the fact that he has the sixth best ERA in the AL, Wright only has a 5-4 record.

David Price has a solid record at 7-1 but his ERA is still over five.  I expect that to change, but it’s a little concerning considering that there isn’t another guy on the Sox’ staff who is anything close to an ace.  You know that Price will be their best pitcher when all is said and done but outside of him, Wright so far, and the return of Eduardo Rodriguez, there isn’t much to be optimistic about in regards to the starters.

Couple that with the struggling bullpen and this team could be in for a long year if they don’t make some mid-season improvements to their staff.  I can’t think of anything more frustrating than watching your favorite team put on an offensive clinic night after night, only for their pitchers to continuously blow leads.

The Sox are 32-21, so it’s not time to go into full panic mode.  But the issues that many anticipated before the season are beginning to show themselves on a more consistent basis, which should scare all of us.