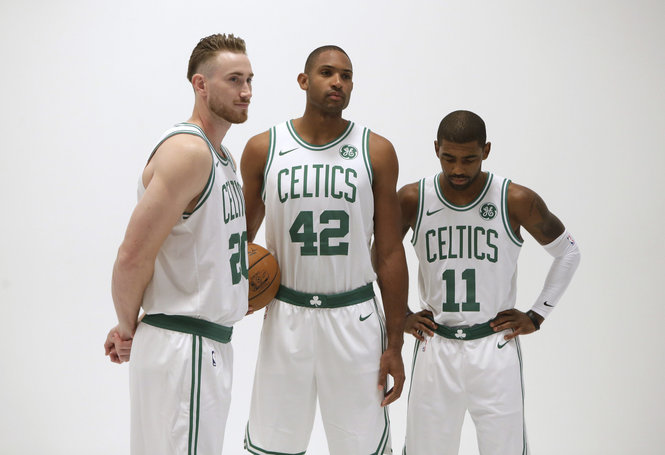 Tip off in Cleveland is less than a month a way and Brad Stevens has a lot of rotational decisions to make.  Who do you start at the 2?  How many minutes should Jaylen and Tatum get?  Do we have enough rebounding?  With these questions looming the Celtics head down to Newport, RI on Tuesday for training and team bonding before opening up the preseason back in Boston on Monday, Oct 2.  Things can certainly change quickly, especially with this many new pieces in place, but as of now here is the lineup I’d roll out on opening night.

No brainer here, Kyrie was the biggest story of the summer and definitely the shiniest new toy Brad has to work with.  His offensive game is elite and will give the Celtics plenty of scoring options.  Irving/Horford and Irving/Hayward pick and rolls are going give defenders nightmares.  His defense isn’t amazing but at 6’3 he can be a capable defender and will still be an upgrade from Isaiah.  As much as I love the dude, defending anyone in the NBA at 5’9 is a damn near impossible task.  The Celts will need elite production from this position and I fully expect Kyrie to give it to them.

The starting 2 guard is spot is probably the toughest call Stevens has to make.  Avery Bradley provided reliable offense, defense, and leadership and that could prove tough to replicate in the early going.  Overall I think Marcus Smart, entering his 4th season, is the best start here.  Smart is the longest tenured Celtics, 20 pounds lighter, and has already proven cable of guarding some of the best in the game.  His shot making still leaves much to be desired (.359 FG% and .283  3P% last season) but the upside on defense outweighs the offensive inefficiency in my mind, especially with Irving and Hayward now alongside.  This could be a breakout year for Smart, he’s likely to get more open looks than he’s ever had before.  I’m remaining hopeful he can bump those percentages up a bit.

Another easy call here.  While the signing of Hayward over July 4th weekend was overshadowed by the Kyrie Irving trade, it may prove to be the most important move Danny made.  Hayward is a 6’8 playmaker the likes of which we haven’t had since Paul Pierce.  He scored 21.9 PPG for the Jazz last year and is an underrated defender.  How he and Kyrie mesh will likely determine much of the Celtics early season success. While former Jazz teammate Rudy Gobert’s comments about Hayward not wanting to be “the man” are clearly loaded with salt, it’s true that Hayward is a great passer and seemed to have no problem sharing the ball with a considerable less talented Utah team (2nd on Jazz in assists last year at 3.5 per game).

Front court alignment will be another early season feeling-out process for Stevens.  Pending any missed time due to he and his brother’s off-court incident, I think Marcus Morris is the best start here.  While it would be nice to have Al Horford playing the 4, starting Morris here gives the Celtics a much more versatile look both offensively and defensively.  Morris is a more than serviceable offensive player (.418 FG% and .331 3P% last season) and a gritty defender who can unleash Marcus Smart level tenacity on other teams’ big guys.

It can be tempting to look at Al Horford’s $27.7 million per year contract and be frustrated by 14 points and 6.8 rebounds per game in 2016-2017.  You could make a legitimate, numbers based argument the Celtics overpaid for his services.  Despite that, it’s also my opinion that the Celtics don’t make it out of the first round last year without Horford on the team.  What he lacks in flash he mostly makes up for in versatility and leadership.  There aren’t too many NBA centers that can lead the fast break, pass like a point guard, shoot from 3 and post up.  Like Smart, Horford will benefit from defenders’ increased attention on Irving and Hayward this year.  Look for him to be open on a lot of pick and rolls/pick and pops.