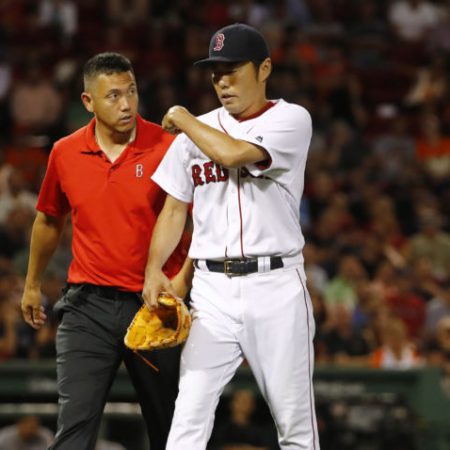 It took just seven pitches for the Red Sox bullpen to be dealt another curveball (pun *FULLY* intended) heading into the most brutal stretch of their season.

After coming up lame and reaching for his right arm following a pitch to Giants catcher Buster Posey in the 9th last night, the Sox announced today that Koji Uehara has been placed on the 15-day disabled list with a right pectoral strain.  Just 11 days ago, All-Star closer Craig Kimbrel underwent surgery on his left knee to repair torn cartilage after he suffered the injury shagging fly balls in the outfield.

With Kimbrel on the shelf for 3-6 weeks (who out there is supremely confident that Kimbrel will be back sooner rather than later?) and now with Uehara on the DL, and also with Junichi Tazawa working his way back from a DL stint, AND with the loss of Carson Smith still serving as a behind-the-scenes pain-in-the-ass loss, the Sox are dealing with an unfortunate scenario in the relief pitching department with 42 games to come in the next 43 days.  Their one off-day comes on August 8th.

Dave Dombrowski remarked following the Drew Pomeranz trade that the team was finished when it came to actively looking to swing a trade, and really it looks like the prior move to land closer Brad Ziegler from the Diamondbacks has suddenly become the more crucial acquisition of the two.  Ziegler, who tallied 18 saves for Arizona before being shipped to Boston, figures to be the new man to kill games with Kimbrel and Uehara on the fritz.

Yet even before these setbacks to Kimbrel, Uehara and Tazawa the bullpen was good but not great.  The loss of Smith really sucked because he was expected to be the type of arm the team now needs.  They have depth with the likes of Robbie Ross Jr., Matt Barnes and Joe Kelly when he eventually makes his return, but in terms of that top-end talent that can be relied upon to make all the difference in the 7th or 8th inning, they’re lacking.  With the moves Dombrowski has pulled off in the past few weeks he’s shown that he’s all-in for David Ortiz’s final rodeo, yet if he wants to put his team in the best position possible heading into September and eventually (hopefully) October baseball, Dealin’ Dave has to add another impact arm to the pen before the August 1 trade deadline.

Who could that pitcher be?  The dream acquisition would be landing Andrew Miller from the New York Yankees but there’s a better chance of Old Man Steinbrenner rising from the grave than seeing the Yanks and Sox complete a deal.  Even then, no matter who Dombrowksi has on his shortlist in the final weeks before the deadline the price to acquire a top-tier arm will be significant.  It’s up to Dombrowksi to target the right guy and put together the right package to bring him to Boston.

Otherwise, the Sox run the risk of seeing the pen fizzle out down the stretch and sabotage any chance of making a deep run through October.